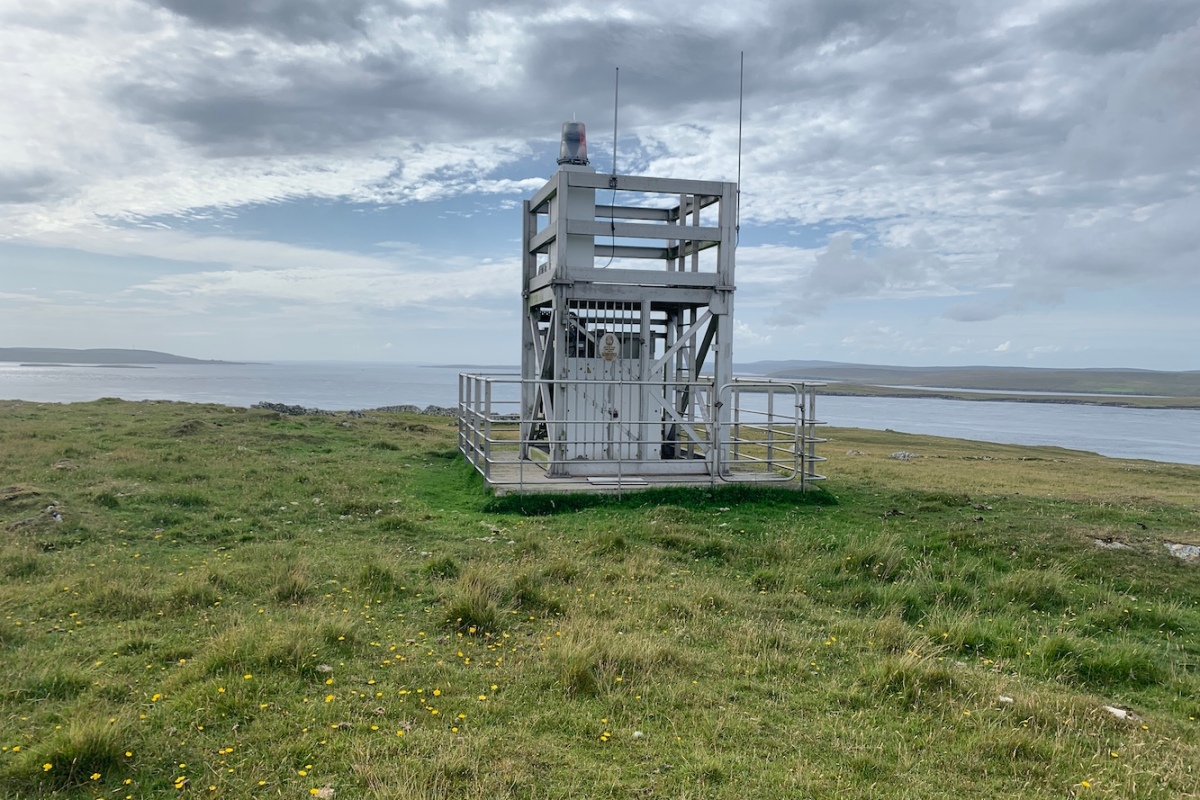 It’s been the final full day in Shetland today, ending a 10-day period of absolute perfection in terms of achieving everything I wanted to. With only three days of no boat trips, plus an extra day for me to spend with the family, there was just enough time to get to the land-based lights I had left to visit.

After the visit to Peerie Bard, home to Mousa Lighthouse, yesterday I have now visited all of the modern flat-pack (SPLAT) lighthouses in Scotland. There are a few I’ve not been close enough to touch yet, but have seen at very close range.

There was one, however, that had been mentioned to me and I’d not included on my list: Head of Mula. This one was built of the same aluminium framework as the flat-packs, but if didn’t have the white cladding on it, which to me is an open structure and therefore not meeting the criteria for inclusion on my list.

I mentioned Head of Mula to my lighthouse pal John and he was keen to see it. I thought it was definitely worth going along to check it out too, given that I am such a fan of the flat-pack type. It looked to be only a short walk from the ferry terminal on Unst. I wasn’t wrong. It is very easily accessed by following the main road north of the terminal for a short distance and then taking a right turn at a track heading uphill.

The track was great and after just a few minutes we spotted the top of the light just above an old wall ahead.

Beyond the lighthouse there were the remains of abandoned houses and it was really quite strange to be seeing such old buildings against the backdrop of a relatively new light structure.

The tower was exactly as had been described to me. This was where it got tricky though as the debate was then on as to whether or not it did qualify for my list. Is it possibly for someone to be enclosed within it? Not really. Someone could certainly step inside the frame, but they would still be completely exposed to the elements and visible to anyone on the outside. Therefore it doesn’t meet the criteria, but here is where the challenge has always been for me in preparing a definitive list of lighthouses.

I always wanted my list to be objective and based entirely on what did or didn’t meet the criteria. I am well aware that one lighthouse may mean a lot to one person and very little to another. I’ve seen plenty of subjective lighthouse lists for Scotland out there and they usually feature the biggest and most impressive of the Stevenson lighthouses, often leaving out the smaller lights that (in my option) are just as enjoyable to visit – if not more so in some cases – as the large ones.

For me one of the big appeals of the flat-pack lighthouses has always been the beautiful places they take you to. Often places rarely explored by the masses and this too is the case at Head of Mula. The views here are fantastic, particular looking south/south east towards the Loch of Heogland and Holm of Heogland close in and then beyond to Fetlar.

Looking west over Bluemull Sound was also excellent and the ferry moving back and forth between Yell and Unst was a regular reminder that civilisation was just down the track.

The light at Head of Mula has everything going for it that most flat-pack lighthouses have, except the white cladding. We jokingly referred to it all day as the ‘naked flat-pack’ due to its lack of white cladding “clothes”.

Thinking about my list, there are some lighthouses on there that I would be more than happy not to visit again, usually due to their location, but I’d happily stroll back up to Head of Mula again. This is where I feel a little envious of those who have their own personal list and can add/take away anything they please. From the point of view of The British Lighthouse Trail though, I need to be less subjective and not adjust it to become a list of lighthouses I personally think people should visit – although I do think that would make an excellent list.

The final decision on Head of Mula then? I’m going to have to say that the jury is still out. In terms of meeting the definition it’s a no. But if I think it’s important that people get to hear about it and visit it then absolutely yes. If any readers have any thoughts on this then do feel free to share these below in the comments.

Back to Shetland though and, as mentioned in yesterday’s post, the past 10 days have really been made so successful by the crew on the two boats we have used. Kevin, Michael and Alan on Lysander and the wonderful aluminium tender were exceptional. Magnie and John on the Papa Stour and Ve Skerries trip were more than happy to get us wherever we wanted to go too. It makes such a difference to have boat crew who enjoy their time out with the baggers. It was a real pleasure to spend time with them all.

That’s it for another trip. I’m not sure where the next one will be yet, but I shall be sure to take my followers on here along wherever it is and report back. 🙂