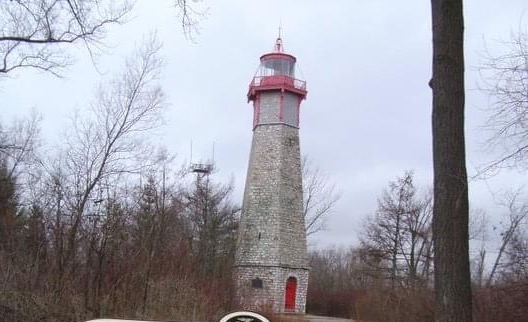 This is the final of my three ‘looking back’ posts where I write about lighthouse visits that pre-dated my 2012 tour.

In 2011 I went to Toronto for a work trip. When I considered the trip originally I had big dreams of travelling along the fabulous lighthouse trail in Nova Scotia. I was still learning to drive at this point though and managing it without driving would have been a huge challenge. Abandoning that idea I decided that I couldn’t visit Canada without visiting at least one of its lights. I chose Gibraltar Point on the Toronto Islands. Gibraltar Point lighthouse is the second oldest in Canada, being constructed in 1808-9. It also holds the acclaimed title of oldest lighthouse on the Great Lakes.

As the name suggests, the Toronto Islands are a collection of islands with Centre Island the largest and home to the lighthouse. They weren’t always islands though and when the lighthouse was built just 8 metres from the shoreline of Lake Ontario it was a peninsula. The area is prone to shifting sands though and Centre Island was first cut off from mainland Canada in 1852. A breakwater was built to reconnect the island and mainland, but the island was permanently cut off during a storm in 1858. The long-term effects of the sandbar moving include the lighthouse now being around 100 metres from the coast

The tower was built to guide sailors safely into York, the city now known as Toronto. It was also used to hoist flags signalling the arrival of ships, in the same way as was done near Bidston lighthouse. In 1832 the tower was heightened and once cut off from the mainland, the keepers became the first residents on the island. Over the years the community grew.

The light was turned off in 1957 and the following year ownership passed to the Metropolitan Toronto Parks Department. Since taking it over they have restored the lighthouse, demolished the old keeper’s cottage and they occasionally open the tower to the public.

The lighthouse is probably best known for the disappearance of its first keeper in 1815. There are various stories about what happened including murder by some soldiers and human remains being found nearby. As a result of the disappearance, the lighthouse has gained a reputation for being haunted.

The lighthouse is easy enough to reach with regular ferries running from Toronto to Centre Island. I went over with a friend who joined me for part of the walk. I don’t have a particularly good memory so can’t recall many details, but it was a nice walk and had an interesting feel about it. It did feel like an extension of the city with various buildings, and man made structures and features – I wonder if the same would have happened if it had stayed a peninsula? It was certainly different from many of the islands I’ve been to since.

The lighthouse is impressive although it’s strange to see it surrounded by trees. It was a slightly overcast day and the area did have a bit of a creepy feel about it. Maybe it would have felt different had it been in the sunshine. It’s fantastic that it’s being cared for though and let’s hope it stays that way. It was well worth a visit. 🙂