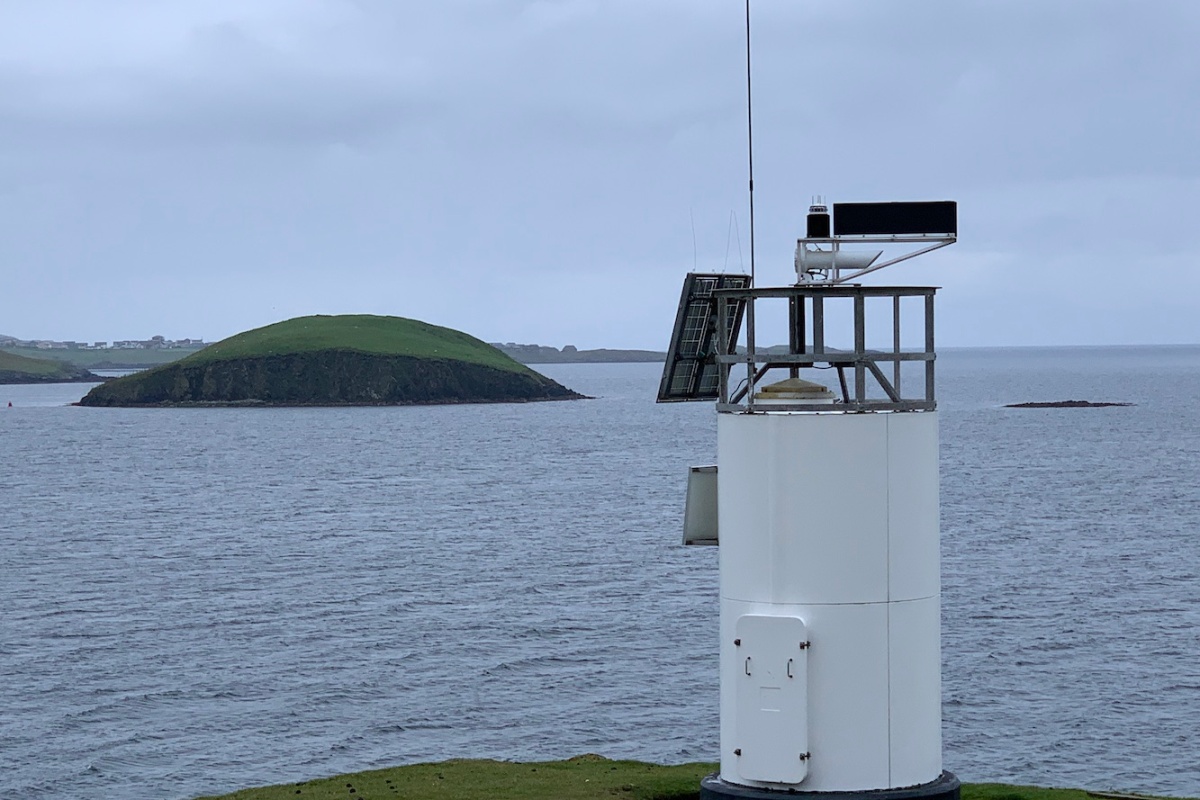 It’s been a great day in Shetland in terms of lighthouses. While the boat trip I was due to go on this morning to see Hoo Stack was cancelled it certainly hasn’t had any impact on the success of my day. Having plenty of the little lights in Shetland still to do we’d already decided that our contingency plan would be to walk to the Point of the Pund light, which we had looked into on our last visit, but not had enough time to fit in. My dad came along too and it was a really pleasant walk, probably in part because a lot of it is on tarmac road and then a land rover track. The little peninsula that the light sits on the end of is very picturesque and you can also see the Fugla Ness light (one of my favourites of its kind) from here. The Point of the Pund light was still on when we got there so we were able to see the red, white and green sectors in action. The tower is not like others I’ve seen before. It is really very basic, but something a bit different is always nice to see. It’s a tranquil location, or at least it was today.

From here we decided to take a look at access to the Rova Head lighthouse. I was aware that getting out onto the peninsula was tricky with tall fences cutting it off. We were intrigued though to see whether it was possible to get around the fences where they met the coastline. As it turned out it was. I’m not going to say I enjoyed the walk to Rova Head. It involved a lot of things I’m not keen on, such as slippery rocks, angry birds (arctic terns in this case), long spongy grass where you can’t tell where you are putting your feet, etc. We made it to the lighthouse though and were lucky that we were there a few hours before high tide. Although it was a calm day today I can imagine it gets quite interesting there in rough conditions. Just before you get to the lighthouse there is a very narrow channel that runs through the rocks and you can hear the sea gushing about down there as you step over it. The lighthouse itself is an Ikea box, and a fairly standard one. While this one doesn’t look a significant structure it is, in fact, considered to be a major light due to its positioning and the important navigation role is plays. If the walk there had been slightly more enjoyable I may have appreciated it a little more. Definitely not one I will be rushing back to!

After stopping off for lunch in Lerwick with the kids and my parents, we were off again. This time on a boat trip to the islands of Linga and Vaila off of Walls. While neither island is home to a lighthouse, there was the nearby Vaila Sound/Rams Head light that I had not seen before. I was hopeful that speaking nicely to the skipper would get us a chance to sail around to see it quickly. Before we even left Bob had spoken to them and they were more than happy to get us around there. But first there were islands! On these trips my priority is usually lighthouses, or islands with lighthouses, so I tend to miss out on quite a few – often due to rather awkward looking landings. The two today though had perfect landing points, a pontoon on Linga and a pier on Vaila, so it would have been rude not to. Linga is a small island, but there is evidence that people did live there once with a couple of houses in various states of ruin and a newer building which suggests that not so long ago (and maybe even still) someone went or goes there.

Moving on to Vaila, a significantly bigger island. What can I say about it apart from that it is fascinating. We weren’t there long enough for me to explore the island fully, I imagine that would take at least a day. I stayed around the harbour area while the others went to the island high point and some other hill and a trig point. There is a beautiful little bridge crossing a narrow little river that obviously comes down from higher ground on the island. When you think of Shetland you imagine wild, remote terrain with any evidence of delicate flora and fauna long since blown away. This part of Vaila though is evidence that the small, delicate and beautiful can live and thrive here. On the small banks of the little river were some small yellow flowers, not the type of harsh plant you would expect, but one so small and dainty. If I were a flower person I might be able to tell you what they were, but unfortunately I am not. I’d happened to be in contact with a friend of mine who lives in Shetland while I was there and he gave me a call while I wandered around and he explained that when he was a child he used to live on the island while his father was a boatman for the estate. He clearly has a real fondness for the place and I can quite imagine what a wonderful place it would be to live as a child.

Just a short distance back towards the pier I noticed a gate with a sign saying ‘Ham Garden Centenary 1913-2013’. I’d heard mention of there being a graveyard on the island  so I made my way in. What I found there was completely unexpected with well-maintained grassy paths leading in various directions through this garden. Since I was young I have always loved the story ‘The Secret Garden’ and it is the garden in the story that I love most about it. In this garden on Vaila I imagined that I was in the secret garden. I made it to the real ‘secret garden’ section and just after entering the tree lined paths I spotted two stones on the ground with the names Effie and Olga on them. Just next to these stones was a stone pug with wings. It turns out that someone who used to live on the island owned two pugs and she buried them there when they died. Hence the stone pug. Further on there were more gravestones, for people this time. Passing beyond these there was a dark section of the path covered by overhanging trees which even I had to bend down to walk through. Beyond that was an old gate and as I headed back towards the harbour through the final part of the garden I’d not been through I spotted a variety of plants you wouldn’t expect to find there. It was a fascinating place. Needless to say, I was glad I’d spent some time there.

Once we were all back on the boat we headed straight for the lighthouse. The Vaila Sound lighthouse (also known as White Ness or Ram’s Head) was looking good from the sea today. Apparently the walk out to it isn’t too bad, so perhaps I will attempt that at some point for a closer look. It’s another flat-pack structure and when you see it from the sea it looks fairly majestic sitting up on the rocks. As with a lot of these locations that used to have the white cast iron towers, there is evidence of some form of liquid, possibly acid, being thrown down the rocks. This was the case here too. I was pleased that a few of the others on the boat took an interest as well, even though lighthouses aren’t their primary (or even secondary) focus. I was reminded by one of the members of the group that he referred to the flat-pack towers as “Steffanson” lighthouses, partly due to the Swedish link with them looking like some sort of Ikea invention, but also referencing the Stevenson link with most of the larger Scottish lighthouses.

It was a good, fun day and hopefully there is plenty more of that to come! 🙂