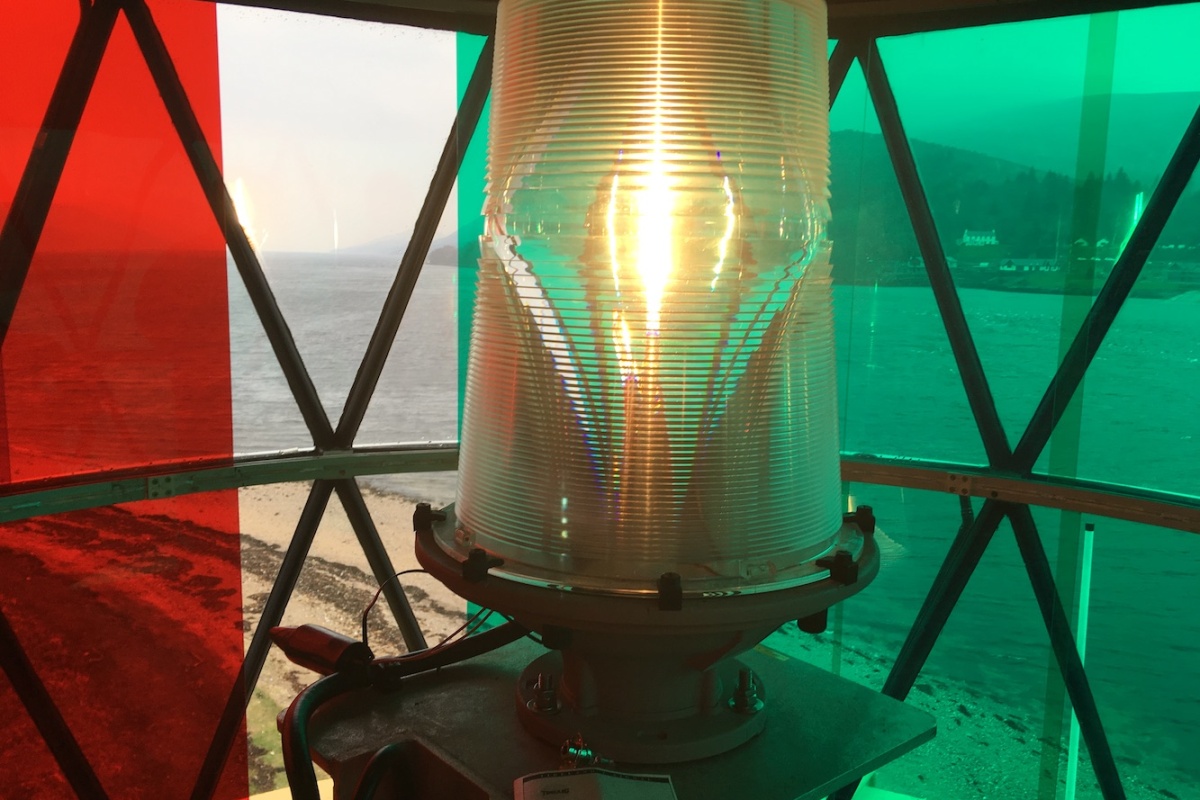 The Association of Lighthouse Keepers (ALK) Oban-based event continued today (see yesterday’s post for adventures on Lismore and the in Northern Lighthouse Board’s Oban Depot). While yesterday involved very little travel time, today was a different matter – as it always the way when you attempt to get all the way to the most westerly point of the Ardnamurchan peninsula.

I met the rest of the group at the Corran ferry and had a little while to wander around taking in the views of the Corran Point lighthouse on the other side of the narrow stretch of Loch Linnhe. It was a dull morning with drizzly rain and overcast skies. I knew this would be the case as I have a theory that there are never blue skies at Ardnamurchan lighthouse, which is a shame as the beautiful Alan Stevenson granite tower would look much more wondrous with a bit of sunshine on it. Anyway, the group arrived on the minibus and I joined them before crossing over on the ferry. The plan had originally been to stop for a look around Corran lighthouse before heading along the peninsula, but with the weather as it was and the conditions looking better for the afternoon we decided to stop at that one on the way back.

You forget just how long a road it is out to the lighthouse at Ardnamurchan. There is no doubt it is picturesque, but there are some pretty scary moments when you are on a small coach, passing other vehicles on single-track roads or on particularly narrow stretches with a fairly sheer drop on one side. We stopped briefly at the distillery for a break before continuing the journey. We finally got there and the group showed their true commitment to lighthouse bagging by heading straight to the cafe!

After a cup of tea we set off to the lighthouse. I can’t recall a lighthouse with a more beautiful welcoming design inside the door. I could describe it, but instead I shall just include a picture as it really does speak for itself (see below). Ardnamurchan lighthouse has some very subtle design features which take some time to notice. The walk (or should I call it a hike) to the top of the tower is fairly exhausting and there is very little to see on the way up – in fact there is nothing except the stairs, blue walls and the occasional window.

Near the top of the tower we met Stevie. He had a tough job today with all of us turning up in groups of 2 or 3 at a time and often overlapping. We did chat to him for a while though and he explained the concerns they have over the new LED arrangement they have very recently had installed in the tower. He, quite understandably, misses the rotating beam and is hopeful that at some point they may bring it back in some way. He used to enjoy seeing the sweeping beam across the beach near his home.

I went for a somewhat bracing stroll around outside at the top of the tower, looking down on the old fog horn and as far as I could see in all other directions. Neil Wright from the Northern Lighthouse Board, who also joined us on the trip, said that on a clear day you could see all the way out to the incredible Hyskeir from the top of Ardnamurchan lighthouse. It certainly wasn’t that clear today.

At the top of the tower Neil had turned the new LED light on. We were warned not to look directly at it due to the power of the light. As I mentioned before, the detail at the lighthouse is subtle. There are small lion heads within the metal frames around the windows which would very easily escape your attention. As I have tended to do at the top of all of these towers over the past couple of days, I was chatting to Neil about all things Northern Lighthouse Board. He said that when they do any work at Ardnamurchan they most often travel by road, which takes around 2.5 hours from Oban, but they sometimes arrive by boat, which knocks about half an hour off of the journey time. It really is quite remote. Stevie explained to us what life is still like out there and how you are fairly self-sufficient due to not being able to just pop to the shop! It’s refreshing to hear when so many people’s lives these days are all about convenience and spending money.

I had a wander around the buildings there before we left. They have the original lens from the tower on display in the exhibition room and you can also see the old compressors for the fog horn. I had a quick look down towards where Neil said the NLB boat arrives when they do travel there by sea. There are even picnic benches down that way. I was surprised to learn that the lighthouse still attracts visitors in the winter months, which often causes problems for the NLB guys when they are trying to work.

Once we had all gathered back on the coach we set off on the long return journey. The sky had cleared a little by that point, although there was still some low cloud hanging around the hills, which was very atmospheric.

We made it back to Corran lighthouse and spent a while in the chilly breeze on the beach in front of the tower. From here it was possible to see across to the Corran Narrows light on the opposite site of the loch. I recalled from our visit to Islay in January that the Loch Indaal lighthouse seemed to very closely resemble the Corran lighthouse, and this was confirmed by Neil. Not only are they similar towers, but they both benefit from having a mountainous backdrop. They also, apparently, feature the same type of LED light, although the Loch Indaal light still holds a lens rather than the two lights we saw inside Corran today.

It’s a tiny tower in comparison to Ardnamurchan and features three sets of very steep ladders. There’s not a lot to it, but the sector light panels at the top make for a very colourful picture. The light had been turned on again so we could get the full experience. Although there is no longer a lens filling the lantern it was a wonderful place to be and we did need to be kicked out in the end as we’d been up there too long! I could happily have stayed there for longer.

Once we’d left the lighthouse we returned on the ferry and that was where I left the group. What a fantastic couple of days it has been, meeting new people, getting to know others I’d met before a bit better and seeing some great places I would never have otherwise been able to see. The highlights for me: Lismore, the tour of Pharos (the Northern Lighthouse Board’s vessel) and probably getting inside the tower at Corran. It’s been a lot of fun and I’m looking forward to more adventures with my new-found lighthouse friends 🙂