So, eagle-eyed followers of my blog will recall that my last post claimed to be the final one for the year. It turns out that wasn’t quite right, which I suspected at the time might be the case, such is the way when opportunities seem to arise out of the undergrowth, even at this time of year.

For a few years now we’ve had our names on a list to go on a winter trip to Bass Rock at the entrance to the Firth of Forth. Every winter the organiser, Alan, would be very helpfully communicating with the boatman and sending emails every couple of weeks with new potential dates and each time it would come back with the instruction “Stand down”. However, last year Bob got lucky and managed to be around for the trip out on the Braveheart from North Berwick. With a four-month-old baby at the time, I was the one who stayed at home, but with the promise that I would still get there, one day.

Fast forward a year and, again the emails were coming and then the disappointing messages would follow. A couple of weeks ago we were about to pack our bags when a second email confirmed that, contrary to the first message, the trip was in fact cancelled. When you do these things frequently you accept that sometimes conditions change. That’s just the way of it. You can’t control it, so you just go with it as and when you can.

Well, the email came through at the weekend to say that while Tuesday was not an option, Thursday might be. We had an “amber light” on Monday and then again on Tuesday. Final confirmation was to come at 6pm on Wednesday. Of course, living as far from North Berwick as we do, I needed time to get there. So, after work on Wednesday I continued down the road to Inverness and waited for news to come at 6pm, which it did and it was a green light! So, I hopped onto a train bound for Edinburgh.

It was an early start in Edinburgh for me this morning to make sure I arrived in time for the boat. I am not at my best in the mornings, but I ended up quite pleased to have arrived in North Berwick while it was still dark. Not only could I see the light on Bass Rock flashing away, but the light on Fidra too. Most impressive of all was the Isle of May though. While both the Bass Rock and Fidra lights have been replaced with LEDs, the Isle of May light is still something that slightly resembles a rotating optic and was fabulous to see flashing brightly in the dark. As soon as the first sign of daylight emerged though the flash was significantly less visible. I strolled out to the end of the harbour which is a particularly good vantage point for seeing the three lights already mentioned. I also spotted one across the Firth of Forth, which (based on its location) was most likely to be that lovely little Elie Ness light. 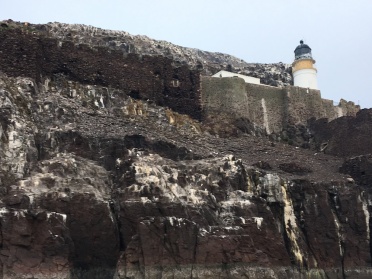 I met up with the rest of the group and we set off. I must admit I was fairly confident that we would get landed as the sea conditions were calmer than the day we went out to Fidra earlier in the year. Bass Rock is an amazing island, very imposing and you can sense that even from a distance away. I had seen “the Bass” a number of times from North Berwick in various conditions, from perfect sunny afternoons to gloomy days when it was shrouded in mist or low cloud. It’s got a similar feel to Ailsa Craig. The approach to the island is awe-inspiring. Seeing that recognisable shape close up is pretty special. We slowed and sat back for a while as the crew had a look at the landing area. There was more swell that we’d be expecting, with the occasional wave from the east skirting around the base of the island. As soon as the skipper, Dougie, started giving advice on exactly when we should go and that he would do two at a time before pulling back and going in again, I began to wonder if landing might not be as straightforward as I had hoped.

I got in the queue and watched as the others flung a leg over the handrail , got a foot on the island when the boat has momentarily stopped lurching up and down, and were then – in some cases – partially dragged onto the island by the crew member on the steps. Having seen the height of the handrail and the speed the others had needed to move I decided not to risk it. I went back down to the skipper and then saw the last guy get off in a slightly more controlled manner and thought “maybe I can do this”. Once I got back to the front of the boat again I changed my mind though. It just was not going to happen. Had it not been for having to climb over the handrail and if it’d had a gap in the middle that I could have walked through then I would have absolutely gone for it. I’ve since spoken to Bob about the landing conditions today and he informed me that “It would have been fine, you just need the confidence and experience”. I have neither, and I’m certain I made the right decision. The skipper himself said it was marginal for landing today, which made me feel a bit better about my choice! 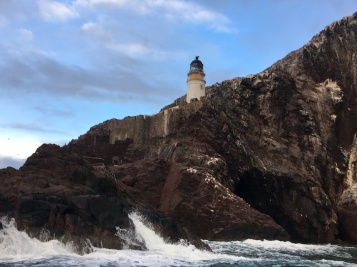 Anyway, not having to endure the stress of landing and getting back on the boat, I chatted away to Dougie while watching the lighthouse and the changing colours as the sun continued to rise. He sailed around to the east of the island to show me the alternative landing “for a laugh”. It was a very uninviting landing today! After that we took a spin around to the west of the island where he pointed out the cave (see picture below) that goes through the entire length of the island and, at low tide, it is possible to wade through. Interestingly, the water to the west of the island is very shallow, at only about 7 metres, while the depth at the east is more like 40. The geology is truly incredible and this is further enhanced on the south by the remains of the various buildings that have called Bass Rock their home, including the castle, which once operated as a prison. 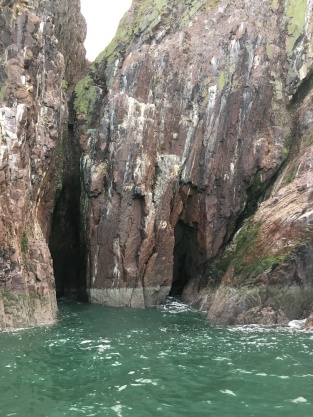 Dougie clearly knows the rock and its history particularly well. He recalls there once being sheep and grass there, which is difficult to imagine now, but the gannets who insist on making it their home each year have destroyed that, as well as seeing away the puffins who used to nest there. Aside from the boat operators at the Seabird Centre in North Berwick, Dougie in the only boatman who has permission to land on Bass Rock, which he has obviously done a number of times. He described the state of the old lighthouse buildings on a recent visit with the roof now threatening to fall in as a result of damp. There has also recently been a mudslide near the lighthouse, which has left a layer of deep mud across some of the path.

He has also dealt with Northern Lighthouse Board engineers a lot in the past. He recalled one time he took them out to the island in the morning to work on the light and returned at dusk to pick them up, but which time conditions had deteriorated considerably. Luckily they managed to get them off safely, but it sounded a bit hairy! He had also taken the engineers out to Inchkeith in 1986 when they were automating the lighthouse there and he spoke very fondly of his memories of looking around the keepers’ accommodation during those visits.

The topic of the yellow-ish paint that the Northern Lighthouse Board use on their lighthouses (I’ve heard recently that it is called “bamboo”) came up. He had a funny story about a local resident who was looking to paint the top of their wall, but didn’t have any paint for it. They had asked if anyone had any and a few massive cans of this bamboo paint appeared and shortly afterwards the wall may have every so slightly resembled a Northern Lighthouse Board shore station, or even lighthouse, wall. I imagine that happens fairly routinely where there is a lighthouse nearby.

By the time the others started heading back down to the landing point the blue sky had appeared and I was able to get some pictures of the lighthouse bathing in the golden sun with blue skies in the background. Sometimes these things happen and you think that maybe there is some force looking down on you thinking “Oh, let’s just send in some beautiful conditions, just for her, just for a few minutes.” It often happens when you don’t expect it, as was very much the case at Barra Head earlier this year. 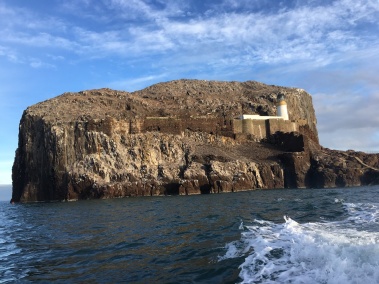 You could tell Dougie wasn’t entirely looking forward to everyone getting back on the boat when he turned to me and said “This should be fun” as they were coming down the steps. Their return was thankfully straightforward with no men injured or overboard, and we set off back to North Berwick. I think we all appreciated the final close-up views of Bass Rock as we sailed away. It really is a magnificent island, even if the others were keen to clean their boots in puddles once we got back to the harbour! One of the guys told me he’d spotted some kind of liquid of various colours and he had no idea what it was. The island was also described as “aromatic” by another!

I may not have landed this time, but I’m not too disappointed. I had a fun morning and got to see the lighthouse much closer than I ever had before. Maybe I will need to join one of the tourist trips during the summer and just accept that I’m going to be surrounded by birds, as much as I dislike the thought. A good day today though, and definitely worth the effort, even if it was just to get a closer view.

I won’t say that this will be my last post for the year this time as it won’t be. Exciting plans lie ahead for one final bagging trip before 2018 is over. More to come on that in just over a week! 🙂