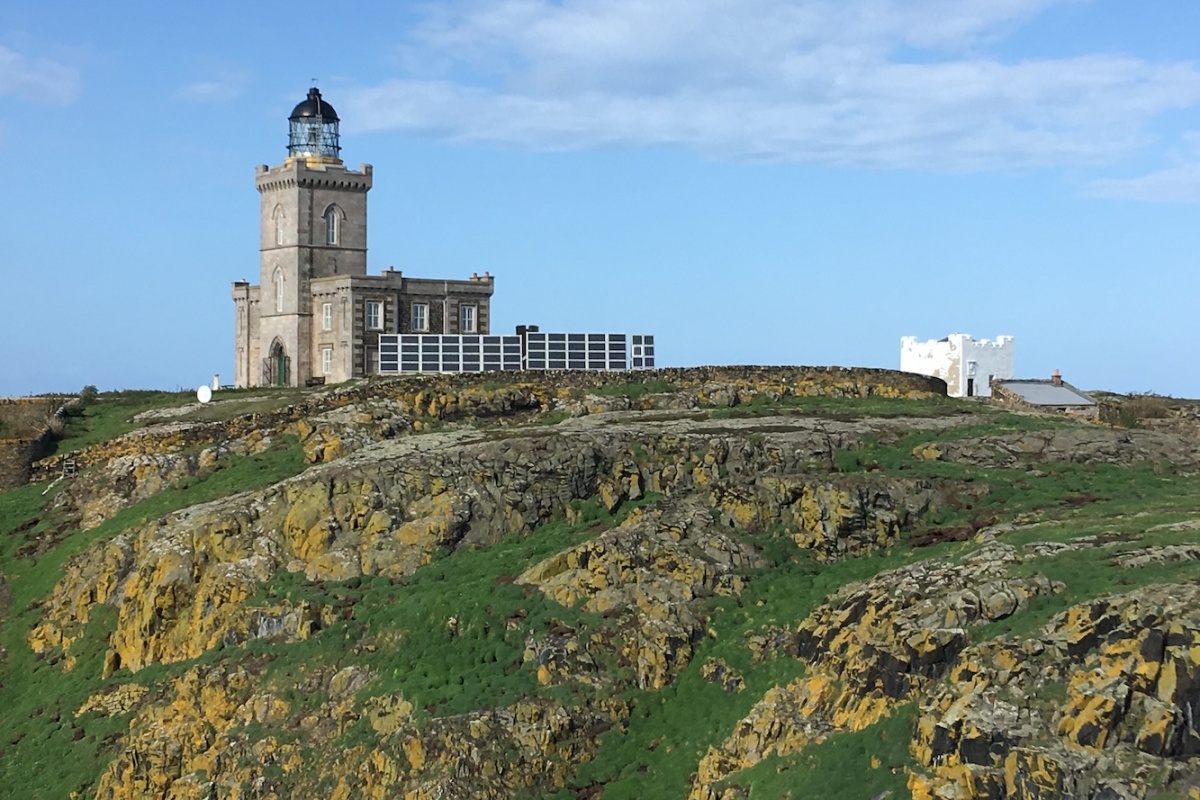 Last weekend we spent a few days in Edinburgh in the lead up to a talk about my book at the National Library of Scotland. Of course, we can never miss an opportunity to take in some lighthouses and, following the disappointment of not being able to get out to the Isle of May recently, we decided a day trip there should be a priority. We had the kids with us this time, which brings its own challenges, but also adds to the enjoyment.

On the way from Edinburgh to Anstruther we decided to stop off in Tayport for a re-visit to the lights there. Although we had pictures of them, I couldn’t recall the previous visit so well. After parking up on the approach road to the lighthouses, I jumped out of the car with my son and we set off. It’s very rare that we take the kids on our true “bagging days” when we visit multiple lighthouses in one day. They only usually join us for the odd bigger tower.

Both land based Tayport lighthouses are, unfortunately, within private gardens (although I imagine the owners don’t see this as unfortunate). The first tower we reached was the discontinued low lighthouse. It’s seen slightly better days but is definitely still standing. It’s really quite old, in fact both towers are, dating back to 1823 so almost 200 years ago. Above the door of the cottage there is a plaque saying ‘1823 Erected by the Corporation of the Trinity House Dundee William Nicoll Esquire Master’.

Further on, we went and spotted the operational high light. A much more slender tower this one. As it’s still active the tower is looking a little better maintained than the low light. The cottage that’s next to it is rather lovely and, combined with the lighthouse, makes for a rather pleasant view.

After we had returned to the car, we went for a drive around the harbour to see if we could get a closer view of the pile light just off of the coast. The pier seemed to be the perfect place, although an even closer view some time wouldn’t go amiss. The tower is not looking well these days. This tower replaced the Tayport Low light in 1848, but itself was turned off in the 1960s. I imagine it’s unlikely anyone will adopt it, but it would definitely need more than a little TLC.

Onwards we travelled to Anstruther and, of course, there is the harbour lighthouse there. Another one that is no longer active. This one has been replaced by lights on a stick. We got some good views of both the tower and the stick with the lights on as we departed on board the May Princess, bound for the Isle of May.

We’d been warned that it was a bit choppy out on the sea that day and to keep hold of the kids. It wasn’s so bad though, although we anticipated it would be worse on the way back as we sailed into the wind. It was all rather pleasant really to have the slower approach this time. The last time we went over we took the RIB, which is much faster, but you can’t get a cup of tea on board! Approaching the island from the direction we did was fantastic as we had some wonderful views of all three lighthouses as well as one of the old foghorns. To make it even better, there were signs the sun was trying to come out too!

We landed safely on the island and were given the briefing by the warden who lives there from March to November. The most important aspect of this talk though was that he said to gather at the big lighthouse at 4pm and he would open it up for us! Super exciting, but it did mean that we needed to get a move on to be there in time.

We gave our son the option of where to go first and he chose the south foghorn so we went straight for it, making our well-rehearsed foghorn noises all of the way. The sun really had come out by this point and in every direction we were treated to wonderful views. Our son loved the foghorn and decided it was his home, but fortunately he was happy to carry on along the coastal path. I am discovering more and more how your enjoyment of places increases when you go there for a second time and the Isle of May is a perfect example of that. As we wove our way around the coast on the well-trodden path, we were getting ever closer to the island’s piece de resistance, the operational tower which watches over the whole island.

Before we got there though I stopped with my son at the helipad so we could spin around pretending to be helicopters. Beyond here, I wanted to take some time to get a closer look at the oldest lighthouse. The little white box of a tower was believed to have been the first lighthouse in Scotland. Since it was introduced it has been reduced in height by around two thirds. When I’d been to the island previously I’d obviously not given it my full attention so it was good to finally see it close-up.

The active lighthouse on the island was just across the path from here. It’s a fantastic building, very majestic with its castellated walls.

I had about 10 minutes before the tour of the lighthouse was due to start and I was keen to go down and see the old low lighthouse. I didn’t want to have to rush once inside the main lighthouse tower and we had to be back to get on the boat at 5pm. I dashed down to the lighthouse and took some photographs. It’s a much more typical Northern Lighthouse Board tower, although it is now discontinued. I find it interesting that the tower here has the small windows in the lantern. The buildings are cordoned off due to the wardens living there at this time of year. It must be a great place to stay and being able to see the active light flashing every night would be incredible.

I arrived back up at the main lighthouse a few minutes before the wardens turned up to open the door. Our two-year-old daughter has clearly caught the lighthouse bug early as she was the first in and even climbed to the top (well, until we got to the steep ladder) – with a little help from Bob. Our son followed on just behind – the bug is strong in him too! As the light mechanism in the tower was moving, we weren’t able to get right up to the top, but we could go out on the balcony. This is really the best angle to see the island from, stretched out below you on all sides with, of course, even more views of the other towers.

It’s an absolutely fascinating island and the only issue I have with it is that you don’t get to spend long enough there. Like Stroma, the two times I have been there I have obviously prioritised the lighthouses and then not had time to fit in a stroll along any of the other paths. But then I find I can’t go there without going to the lighthouses! Not a bad predicament really.

It was time to head back down to the boat and we waved goodbye to the lighthouses as we sailed back towards Anstruther. Fortunately, the sea had calmed down, although there were still some rocky bits every now and then which our daughter loved.

Once back at Anstruther, we decided that while we were in the area we should head up the coast a short distance to see Fife Ness lighthouse. I hadn’t been there since my original tour in 2012 and Bob had never been. It is one that I’ve looked at a lot in recent months as it’s an unusual structure, essentially just half a lamp room with a flat roof and a single storey building on the back. I took our little boy with me again to walk around the coastal path that takes you around it. As much as it bothered me when considering certain aspects of my book, I really like it. It’s quite a substantial lamp room and it contains a proper lens too, which is becoming more and more rare.

Stopping off in Anstruther again for dinner, I strolled along to a car park just beyond the Lifeboat Station to see if I could spot the Isle of May light flashing. I was confident that I would as I could clearly see it from North Berwick as the sun was starting to rise last December. Sure enough, there it was flashing away. On the way back we spotted the small light at Elie Ness flashing too, another one that I was able to see from North Berwick last year. There’s something about seeing lighthouses (or should I say their lights) by night. It’s when they are supposed to be seen. All in all, a really good day and we returned to Edinburgh ready for a good night’s sleep 🙂