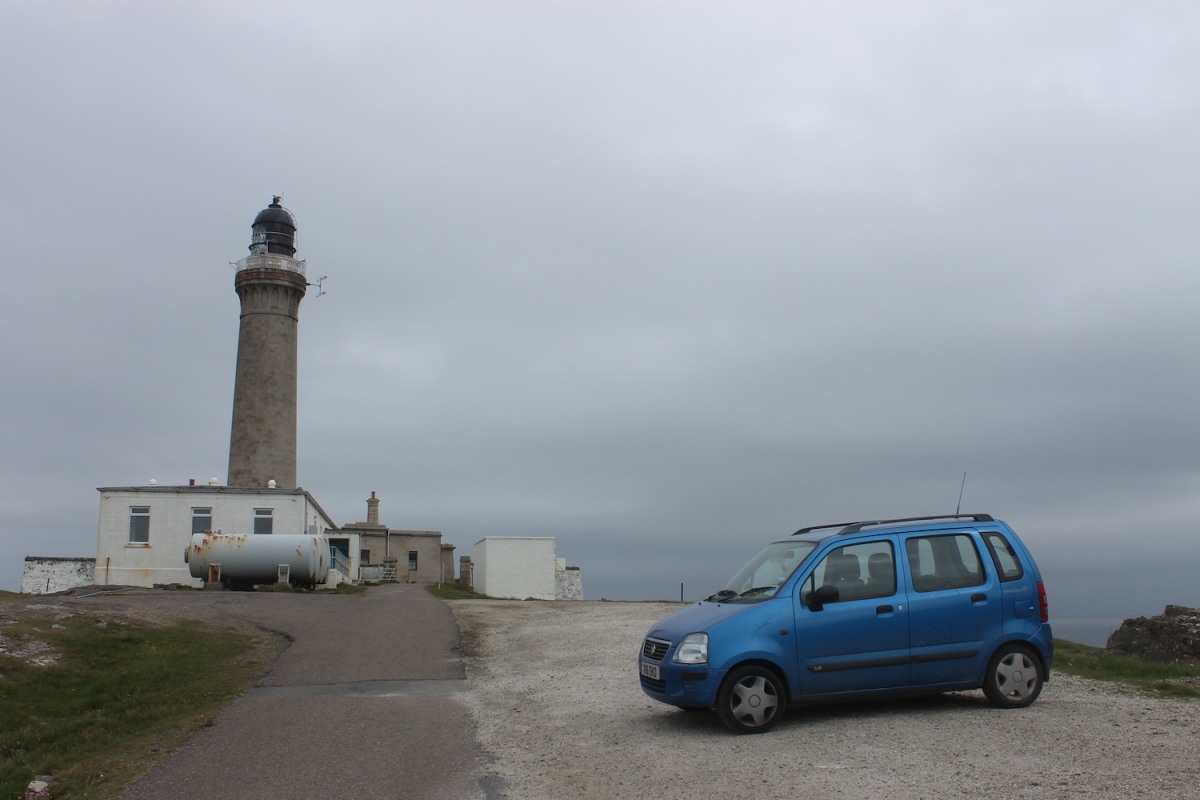 In my last post I looked at the early years of my fanaticism. This second instalment of my reflections covers a much shorter period, just over a couple of years from 2010 to 2012. Much of it has already been documented on this site so there will be some parts I won’t go into great detail about, but others that haven’t been included or have only had a passing mention. I have included some pictures throughout this post, many of which I won’t have shared before.

I’ve called this instalment ‘the touring years’ as it was when I first had the notion to visit more than one lighthouse at a time. This all began in early 2010 when I came across a series of books by Tony Denton and Nicholas Leach. These books included Lighthouses of Wales, and four or five others covering England. These books give a history of lighthouses large and small as well as brief details of how to reach them. Suddenly an idea came to me and that idea was the planting of the seed for my 2012 lighthouse tour, travelling around the coast of mainland UK visiting as many lighthouses as I could along the way.

It was not so long after the idea was planted that a friend and my sister organised a mini lighthouse tour in 2010. I wrote about this in one of my more recent posts.

Another chance discussion around April 2010 with a couple of friends led me to the realisation that the idea could actually become a reality, but it was going to take some work. At that point I was in my late twenties and had never learned to drive. I’d never seen the need or had the desire, and the fact that I was based in London gave me even more reason not to bother. But the idea of the lighthouse tour changed that. Suddenly I found that a friend was learning to become a driving instructor and I knew that, with a full time job and very little free time outside of that, I was going to need a car to be able to achieve what I wanted to do.

Time was a big concern and I wasn’t satisfied to do a weekend here and there to reach a few lighthouses in one go, or just a week filled with lighthouses. I was desperate to get out there and a key part of that was getting to Scotland, which is such a vast land and needs plenty of time to be enjoyed.

Just over a year after starting to learn to drive with Dave, who now runs EVO Driver Training on the Isle of Wight, I passed my driving test (thanks Dave!) and found myself a little blue Suzuki Wagon-R.

There was just one thing left to do to allow the trip to happen. I don’t recall the conversation I had with my boss when I asked to have a month off work to be able to do the trip. Thinking back it was a pretty cheeky thing to ask for, but as I mentioned in my last post my love of lighthouses has shown how determined I can be. I get tunnel vision and, at times, can lose sight of the impact of my plans on others (perhaps my dad was right in calling my determination ‘grim’ after all). However, my boss agreed to it. He knew I had been going through a tough time of late and I was in a difficult relationship that was getting progressively worse. This had caused me to question whether or not I was in the right place (that grim determination also meant I wouldn’t easily give up on relationships either). I suppose he thought, “If I don’t let her go for a month I may lose her for good”. Whatever he thought doesn’t really matter now. The most important thing was that the answer was yes and my colleagues were happy for me too, even if it did mean extra work for them while I was away (sorry and thanks, Jane and Michael!).

With plans beginning to come together and recovering from the eventual breakup, about which I felt sad and relieved in equal measure, I threw myself at the idea and must have been a very boring flatmate to my friend Liz during much of 2011. I spent every evening planning my trip: working out where I needed to go; looking at access to the lighthouses; researching campsites; and even working out where I could park for each lighthouse (yes, I really was that organised). At the weekends I would catch the train down to the Isle of Wight for driving lessons as I didn’t fancy learning to drive in London. Outside of work my life became, near enough, all about the trip.

The trip itself is very well documented in my earliest posts, and I did a couple of reflective posts afterwards about the people I’d met along the way, stats relating to the tour, and some of the best campsites I’d stayed at. I was absolutely astounded by the weather and looking back at my pictures from that month I am still amazed that it was so good for such a large part of the trip – almost right up until I was blown out of Wales! The freedom I had during that month took a bit of getting used to, but after a few days I was past that and also past worrying about the fact that the engine warning light on the car came on just a couple of days in!

One aspect of the trip that I’ve not considered on here before is what I would do differently if I had the chance to go back and do that trip again. Given that these are reflective posts, I think now is a great time to consider that.

There are a few things I could have done differently with the benefit of hindsight, but when I consider each one, I can usually think of at least one good reason why I’m glad I didn’t do things differently. For example, I could have done better research on Scottish lighthouses, particularly some of the smaller ones. Then again, if I had done I would have spent a lot longer in each area of Scotland and not reached South Wales. Also, it’s been great to discover the smaller lighthouses and grow fond of them rather than visiting them early in the journey and disregarding them (as many do) as not being a “proper” lighthouse . I now have a far deeper appreciation of lighthouses of all shapes and sizes than I did then.

I could have been braver with driving and tried to park as close to the lighthouses as I could. On the other hand, some of the walks I did as a result of parking further away were fantastic.

I could have been less anxious about getting to campsites and just parked up in lay-bys in Scotland to get some sleep in the car or tent. However, I was very aware that I was a lone female travelling around and so staying at a campsite felt safer (with the exception being the strange men at the campsite in Peterhead!).

I suppose the one thing I do sometimes regret is how lazy I was in the early days. I didn’t explore lighthouses then in the way I do now. These days I much prefer to see them from a range of angles and just generally wander about the area a bit if I can. Back then I wouldn’t put in that sort of effort.

After the tour I returned home to London. I had no plans at that point of what I would do next. To go from that level of freedom for a month to being back to the daily grind could have really got me down. It turned out I didn’t need plans though. There wasn’t time for that before the next chapter began…. More on that soon 🙂