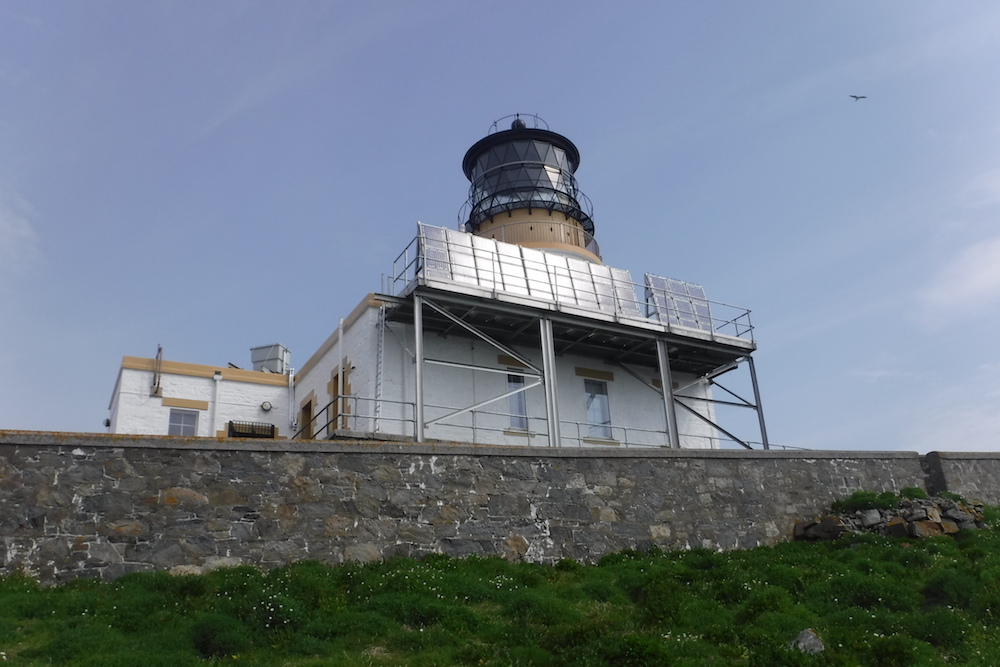 For the past three years we have been holidaying in the Outer Hebrides, based on Lewis or Harris, with a chartered boat lined up and ready to take us, and a number of other hill/island baggers out to the Flannan Isles. All three times the trip has been cancelled due to poor sea conditions.

The Flannan Isles lie 32km west of Lewis and, as you can imagine, are subject to some pretty wild seas at times. Having spent so many years waiting to get out there, a part of me thought it might never happen. But then we saw the forecast for last week, which coincided with what had become our annual holiday to the Western Isles. Sunshine, virtually no wind. It was looking promising and even more so when we received a message to say that our boatman, Seumas Morrison of Sea Harris, was confident that we would make it out there. Landing, though, would be another matter entirely…

Of course, my priority was landing on Eilean Mòr, the main island, which boasts the famous lighthouse (more on that shortly). The group we were with, including Bob, were also interested in landing on the other seven islands (or lumps of rock, in some cases) that make up the Flannans. The sea looked nice and calm on the morning we headed out. None of us expected to be able to land on anything other than the main island, and we weren’t even sure about that one!

After an hour and 40 minutes on the boat we approached Eilean Mòr. Quite quickly we realised that a landing would definitely be possible, although we’d need to time it right to avoid getting wet feet. Very kindly, Bob had taken along a rope and he joined a couple of others as the first group to land, which then gave him time to set up a rope/handrail to help the rest of us. We arrived at the east landing, which very helpfully still has many of the steps intact. A clear path then took us up and in a big, sweeping route around to the lighthouse. The path followed what would have been the tracks (removed now), which would have taken the supplies up to the lighthouse. Apparently the interchange point between the tracks going down to the east landing and the west landing – which they would change manually – was known affectionately by the keepers as “Clapham Junction”.

The lighthouse sits beautifully at the top and there’s a real awe-inspiring feel about the place, possibly helped by its remoteness and how challenging it is to get to. Slightly off the path to the right as you walk up is the old chapel (known locally as the “dog kennel” apparently, which says a lot about its size!) As you walk up, the helipad is just behind the chapel.

On such a calm day, it was difficult to imagine how wild it could be out there, although the state of the west landing area suggests the severity with much of what was put in place for the keepers’ landings, including the steps, having been washed away.

It is easy, before visiting the island, to view it solely as “the one from which the keepers went missing”, but visiting the island gives you the opportunity to see it for what it actually is, which is a beautiful structure, built in (what must have been) a challenging location that now makes for a very special place. There is a feeling you get on these islands off of the west coast of Scotland that I haven’t experienced anywhere else – possibly, in part, due to the low number of visitors to these islands. Hyskeir is another example as is the Eigg lighthouse on a small island to the south east of Eigg. It’s isolation, but the beautiful kind that soothes the soul. It probably helps that I’ve been to them on calm, sunny days!

Descending down the path and back on to the boat went smoothly with our “handrail” in place! We then went on to get those more adventurous members of the group landed on all of the other islands, which I sat back, viewed the Eilean Mòr lighthouse from various angles and watched one of the boatman successfully catch numerous coalfish and some fair-sized pollock. It was all very relaxing.

Later in the week, we grabbed the opportunity to visit the exhibition and memorial dedicated to the three keepers lost from Eilean Mòr in 1900. For those not aware, on the 15th December a vessel passing by noted the light did not appear to be operating. When a boat was sent on 26th of that month (after being delayed by the weather from 20th) for the changing of the keepers, the first man onto the island reported that none of the three keepers were to be found. There are numerous stories about what could have occurred, including a poem that took a little artistic licence with the story. The most likely story, in my opinion, is that one or two of them got into some trouble at the edge of the island and the other went to help resulting in all three being lost to the sea. It’s a very sad story and the exhibition and memorial pay tribute to them.

The exhibition, titled ‘Waiting for darkness to fall’, opened in April at Breasclete Community Hall and is open daily from 2-4pm. The community of Breasclete chose to develop the exhibition and memorial as it is in the village that the lighthouse’s shore station was based (it is still there now and stands out clearly from the rest of the buildings. A picture can be found in one of my previous posts). It features descriptions of the Flannan Isles, the building of the lighthouse, what is known about the disaster and the aftermath. A great deal of information has been pulled together for the exhibition, including excerpts about the island from various publications, weather reports from the time the keepers went missing, newspaper cuttings following the loss of the keepers, and pictures of the development, building and launch of the memorial, which is located just half a mile down the road, next to the water’s edge.

We spoke to a very friendly gentleman from Breasclete Community Association who was on hand to chat to visitors and he informed us that there are a number of potential plans in the pipeline to ensure the exhibition can remain permanent and expand upon it. He said that they hope to introduce visits out to see the island itself by boat or helicopter at some point and also look for a more permanent home for the exhibition. I had read online that there has been some talk about the community purchasing the shore station and using the building as a home to information about the lighthouse and the missing keepers.

Of course, we also had to visit the memorial. It really is a lovely piece of work. The artist James Crawford of Garynahine has carved the shape of the lighthouse out of sandstone and it sits on top of a Lewisian Gneiss rock shaped like Eilean Mòr. This stone is on a bed of smaller stones with beautiful sandstone block-work around the edge. A bronze wave appears to the left of the island, the wave heading straight for it. A plaque features on the front with the names of the three keepers: James Ducat, Thomas Marshall and Donald Macarthur. I’ve included a couple of  extra pictures below of the finer details.

Having the opportunity to see both the island and lighthouse as well as the exhibition and memorial in the same week was a real treat. I feel very lucky to have been able to do so. 🙂