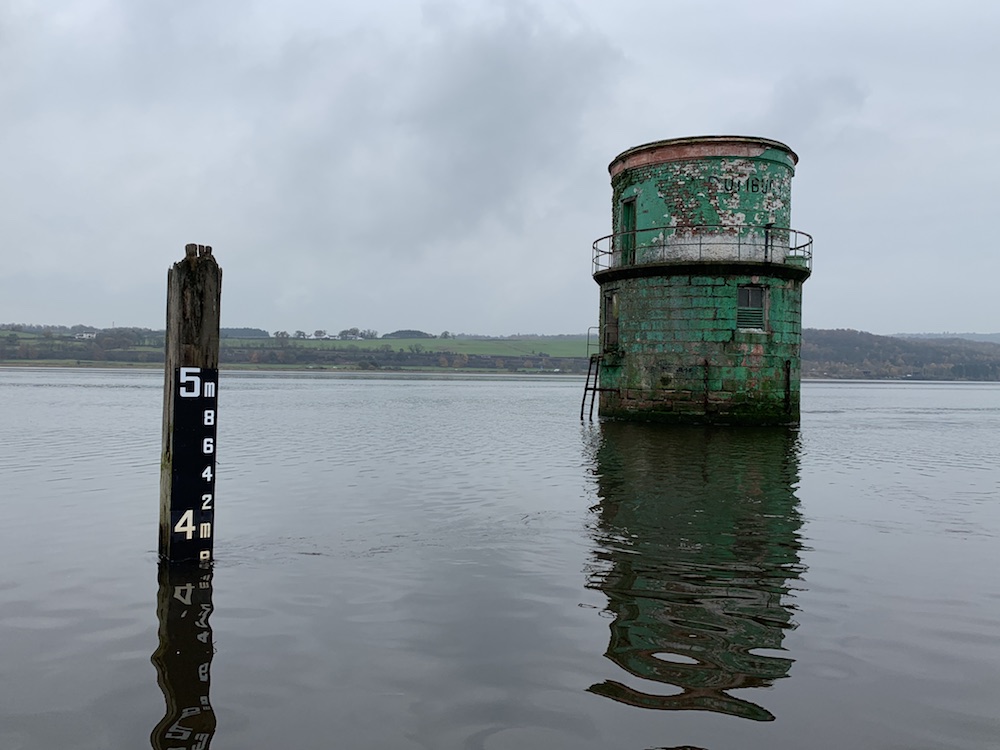 We made it onto the Clyde this morning with Greg and Ian from Seaforce. The purpose of the trip was to take in the four lighthouses between Renfrew and Dumbarton. While the Blythswood (Renfrew) and Donald’s Quay (near the north side of the Erskine Bridge) lights are accessible on foot, there were two less accessible: Dalmuir East and Dumbuck, hence why we chartered Seaforce’s RIB to get us to them.

Bob had suggested taking the kids and his mum with us for their first RIB ride, which seemed like a good idea, if a little more effort for us. Boat trips are very easy when you don’t need to worry about small people. When they come along you’re obviously worrying about their warmth, safety and whether or not they might just kick off at any moment.

The conditions couldn’t have been much better today, taking into consideration the fact that it is November. The river was nice and calm so balancing clinging onto the kids with trying to stay in the boat ourselves wasn’t such a problem. Bob had offered to be photographer as our one-year-old daughter is still hesitant to put me down after our recent periods away from them. While the boat was moving Bob held onto our four-year-old who he could temporarily let go of while the boat was stationary.

The first lighthouse we reached was Blythswood. This light can be seen from the coastal path north of Renfrew, so not so difficult to get to. The river has a plethora of mainly green, but also, red lights and markers. Blythswood is green and is the only one in this section of the Clyde that looks like a traditional lighthouse. It has a band of graffiti on the lower section of the tower, which is a shame, but seems common on the accessible Clyde lights. Not only was the water calm today, but it was a little overcast making it an ideal day for reflections in the water. Blythswood stands on the edge of a tree-lined path and reflections of Autumn trees in water is always beautiful.

We continued on to Dalmuir East. This had been a troublesome one. It is located just at the edge of an industrial area with what appeared to be no access at all to the site. So there was only one way to see it! This one is smaller in size than some of the others along the Clyde, but many of those have external ladder access only whereas Dalmuir East has internal access. The lack of graffiti on it is probably a sign that it’s not possible to reach on foot.

Donald’s Quay, on the north bank of the Clyde next to the Erskine Bridge, was our third lighthouse of the trip. This one is easy enough to access, but while we were passing we thought it would be rude not to stop. This one is almost identical to the Dalmuir light, except it has a stone base, making it appear slightly more substantial. It was nice to sail under the Erskine Bridge too.

Our final stop of the day was at Dumbuck. Last Thursday we had stopped briefly near Dumbarton Castle to see it from the shore. It offers a distant view, but it is only when close up to the tower that you see that the structure is much larger than it’s various neighbouring lights and markers. On the upper stone section you can see the old windows, the majority of which are now broken. Greg informed us that there was previously a lantern on top, but this collapsed around the year 2001. There is a picture of the collapsed lantern here. We were pleased it was high tide while we were out as it meant we could get closer to the lights than we would otherwise have been able to. It’s a shame that the light has fallen into disrepair, but that is the often the problem with these structures located in or close to the sea that are so open to the elements.

That was it for our hour on the Clyde today. We are looking to organise a trip with Seaforce next year to head out to Loch Long and Loch Fyne to see a few of the inaccessible by land lights out there. They were really helpful guys and weren’t fazed at all by the kids coming along (they both came along as a result of us taking children – it may have just been one of them if it had just been the two of us). The kids were well-behaved thankfully. The youngest fell asleep and the eldest really enjoyed the “fast boat”.

So, this may well be the last post of the year, which isn’t bad going seeing as it’s already November. This has been the longest “bagging season” since 2012 and absolutely the best year so far. I’ve seen lighthouses I had been waiting a long time to see, discovered plenty of new places and met some wonderful people and new friends through my more active involvement with the Association of Lighthouse Keepers.

Plans are already afoot for some very exciting trips next year already, the thought of which should keep me going through the winter. For now though it’s time for me to go into hibernation in terms of visiting lighthouses, and save some money too (for next year’s trips, so the boss says). Thank you so much to those of you who continue or have started to follow my blog this year. I hope you have enjoyed reading it as much as I enjoy writing it. If it has helped, inspired or encouraged you in any way then it is doing exactly what I intend it to. Until next year… 🙂