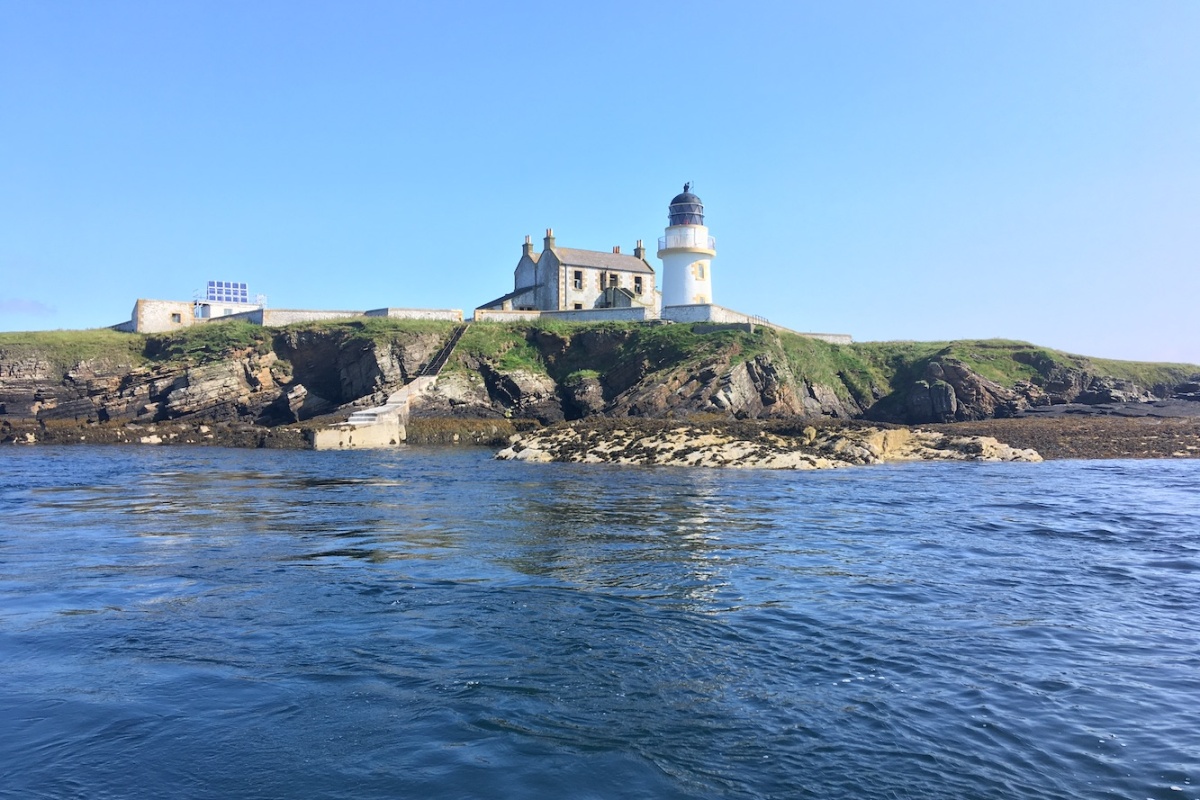 The Orkney adventure continued today with a second day out on Northerly Marine Service’s covered RIB Sula. We’d taken a quick look at Helliar Holm yesterday before heading back, but the tide was too low to get onto the slipway. The decision was made to do it first thing in the morning.

We started the day with a closer view of the old lighthouse in Kirkwall. It was nice to see it without fishing paraphernalia surrounding it.

We had to wait a little longer though as our first stop was Shapinsay, which is the island Helliar Holm sits just off of. While the island baggers went off to the high point I wandered around with John. Shapinsay is a beautiful island, particularly the harbour area where you have The Douche, an old salt water shower with a dovecot on top, and the beautiful Balfour Castle with it’s gateway. I would have liked to have walked to The Douche, but the Highland cattle in the way put me off a bit. There was still plenty to see there though. From the old public toilet just above the pier to the fantastic stone towers that littered the coastal roads and decorative stone architecture all around. It’s a wonderful island and I’m very glad that the guys needed to get to the high point. I think it would be a great place to take the kids sometime.

It was just a quick hop over to Helliar Holm once we’d left Shapinsay. The tide was a little low again, but I managed to get onto the slipway with no trouble. The landing is well maintained as is the short tower. It’s a great little tower and particularly attractive. The sector lights add to its loveliness – a bit of extra colour never goes amiss. While the tower is in good condition, the same certainly can’t be said for the old keepers’ houses behind it. You can see from the sea that they are in a particularly bad way. When you are on the island and see pigeons flying out of the broken windows it’s never a good sign. It’s in a really bad way as can only be expected when it was abandoned in 1967 and nothing has been done with them since. It has been said that someone bought the cottages when they were sold by the Northern Lighthouse Board after automation, which is a real shame. It’s a great little island. Responsibility for the lighthouse was passed to Orkney Council due to the light only really being used for navigation into and out of Kirkwall. The old sundial is still there, but even that looks like it needs some renovation. Having said that, I think the building is beyond renovation now. We walked up the steps to the first floor entrance, but it certainly wouldn’t have been a good idea to have gone inside. No doubt we would have ended up on the ground floor having gone through the floorboards. Instead John and I played see-saw on part of an old door that was resting across the top step. Not your average thing to do at a lighthouse! It was a really interesting island to visit though and certainly a good one to get to as it’s so visible, but not necessarily easy to reach.

After we left Helliar Holm the island baggers did what they do best and reached the high point of a few islands. While they were on the island of Wyre we popped across with the boatmen to get a cup of tea on Rousay, which was a nice relaxing way to spend half an hour or so. We all then landed on Egilsay. To me Egilsay felt like a smaller version of Eday. There was no one about and we caught glimpses of St Magnus Church as we walked up to the crossroads. We decided to carry on ahead and stopped at the local community centre, which was open. They’ve got a fantastic setup there with a kitchen, big room for events, lounge and, most importantly, a toilet!

A few islands later we entered Calf Sound between Eday and the Calf of Eday. It was a perfect opportunity to land at the little lighthouse for another visit. It was a seaweed-covered landing and I was glad to have Bob the Handrail there to help me across. The tower is looking a little rusty now, but it’s always good to revisit an old friend.

Our final island for the day was Sanday. Unfortunately not for the lighthouse at Start Point this time, but we got in touch with a friend who lives on the island and he came to pick us up from the ferry and whisked us up to the island high point. It felt a little like Challenge Anneka, but it was good that everything came together at the end of the day and it was another successful day for all involved.

Northerly Marine Services have been exceptional over the last two days, doing everything they can to help us out. Also, we now know that if the conditions are right it’s possible to visit Auskerry, Copinsay, Helliar Holm and Pentland Skerries all in one day. Wonderful! Got to love lighthouses! 🙂