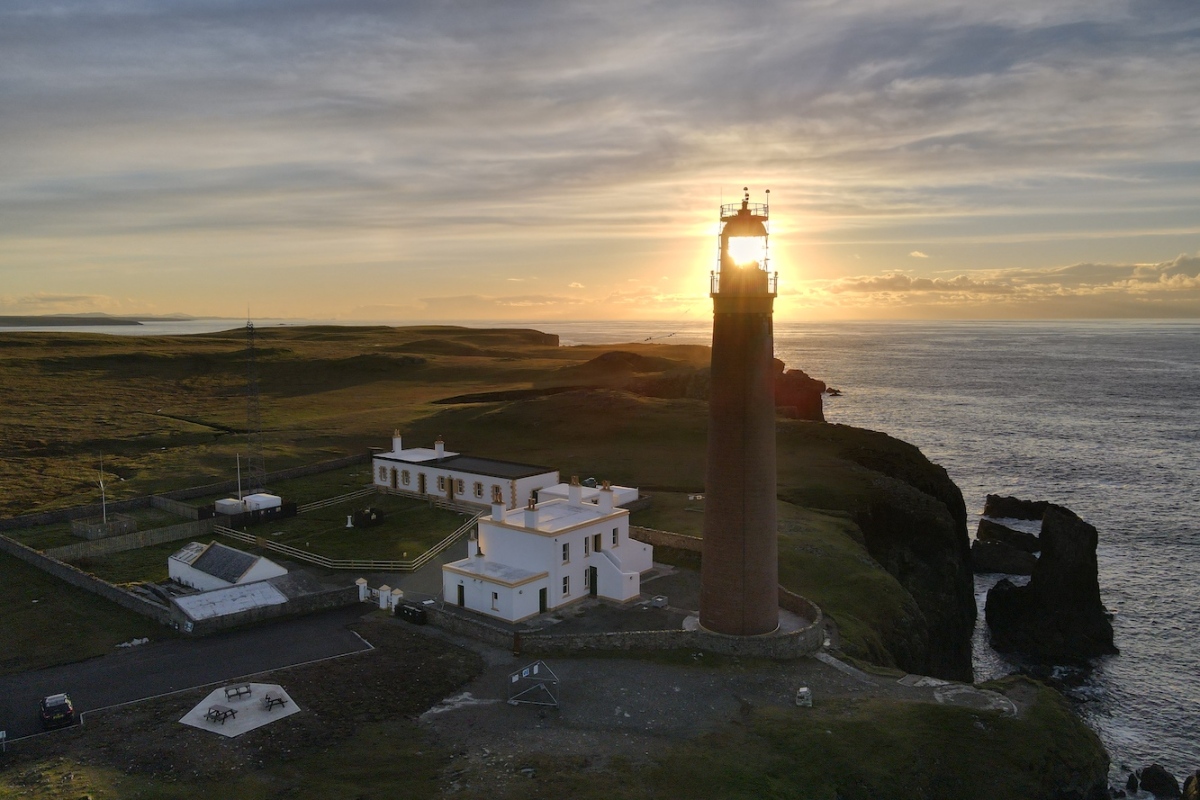 Today was the first day of a new adventure in the Western Isles. With our son now at school, we called upon Bob’s mum to take the childcare wheel while Bob and I have a week away exploring even more of the lighthouses and islands in the area. This will be our sixth week-long break over here and I’ve grown very fond on the Western Isles since I first visited in 2014. Many a day has been spent on the water here and there is no place like it.

This morning we set off early and quickly realised how cold it was. The sky had obviously been beautifully clear overnight leading to layers of frost on the trees. Very unexpected for September.

The first lighthouse we spotted today was Loch Eriboll. This little flat-pack lighthouse may not be much to look at, but I think it’s quite special and I’ve enjoyed a couple of great walks out there. As it was still early the light was on and I was pleasantly surprised to see it’s flash was a lovely warm white light rather than the harsh LEDs so often used these days. I am always intrigued by Loch Eriboll lighthouse as it seems like such an unlikely location for a light, bit I suppose if you consider that the loch is the only large safe haven to the west of Scrabster for ships passing along the north coast then it makes a lot of sense.

With a little time to spare before we needed to be in Ullapool for the ferry we swung into Rhue, just to get a view of the lighthouse there, which always looks good against the surrounding landscape.

We were grateful that the weather was calm and dry today as it meant our crossing on the ferry was much more enjoyable. We’d chosen to sit outside to avoid the extra risk that comes with being around people indoors these days. It was lovely to pass Rhue lighthouse again and then Cailleach Head lighthouse too and remember our walk out to that one last year in glorious weather. I’d been reliably informed that the Northern Lighthouse Board’s technicians had been out at the lighthouse just yesterday to fix a fence that had been damaged by livestock. What a varied job they must have!

After catching a glimpse of Tiumpan Head as we approached the Western Isles we were greeted, as always, by the small but perfectly formed Arnish Point lighthouse. It always reminds me that I am arriving at a place which I have so many wonderful memories of. Lots of laughs, friendships made and masses of fresh air.

As soon as we arrived we checked into our self-catering cottage. By this time I had already started to wonder whether or not it would be possible to see Tiumpan Head lighthouse flashing from the house and it didn’t take me long to discover that I had a problem with seeing it, if indeed I could, from the upstairs windows due to them being so high. Ever the resourceful one, Bob grabbed a chair for me to stand on and I discovered that, yes, peering out to the left you could make out the lighthouse tower in the distance. That was an added bonus I’d not expected, as were the freshly-baked scones the owner’s wife had made for us and the range of local goodies in the fridge too!

After Bob had popped up a hill (spotting the Flannans Islands in the distance from the top) we headed north in time to see the sun going down at Butt of Lewis. I’ve been to the Butt of Lewis a number of times, probably every time I’ve been to the Western Isles, but it’s always been a bit windy, wild and sometimes wet so we’ve never spent very long there. On previous trips the good weather days have been reserved for boat trips to exciting offshore islands and lighthouses. So in today’s calm conditions it was lovely to wander around a bit more and enjoy spending the extra time there. The parking area next to the lighthouse has clearly had some work done to it recently with new kerbs and some picnic benches. The setting sun always casts such wonderful colours over everything and it was no exception here. As with all lighthouses it is always best shown in pictures so here are a few.

The latest addition to the family, Joe the Drone, has also made the effort to join us and with there being barely any wind it wasn’t long before he was up and away capturing some fantastic images. I should thank Bob for his very important role in getting them. Here are a few of Joe’s pictures.

It was beginning to get cold as the sun was making its final descent below the horizon so I hopped into the car and waited for the light to come on. Sometimes the sun seems to set so quickly, but it all took a little longer at Butt of Lewis. I was a little disappointed to find that it’s just the back-up lights in operation at the moment as they don’t give the same effect, but it was still good to see it working.

As we drove along the road away from the Butt of Lewis I kept my eyes on the horizon to the north east as we had been able to see the hills around Cape Wrath on the way out to the lighthouse. I thought I caught a glimpse of what could have been Cape Wrath lighthouse flashing. I mentioned it to Bob and he pulled over and confirmed that there definitely was a flashing light over that way. That was good to see.

On the way back to the cottage this evening I spotted Tiumpan Head flashing with it’s modern bright white on/off light and I wondered if I would be able to see it from the window at the cottage after all. I am delighted to confirm that I can. 🙂