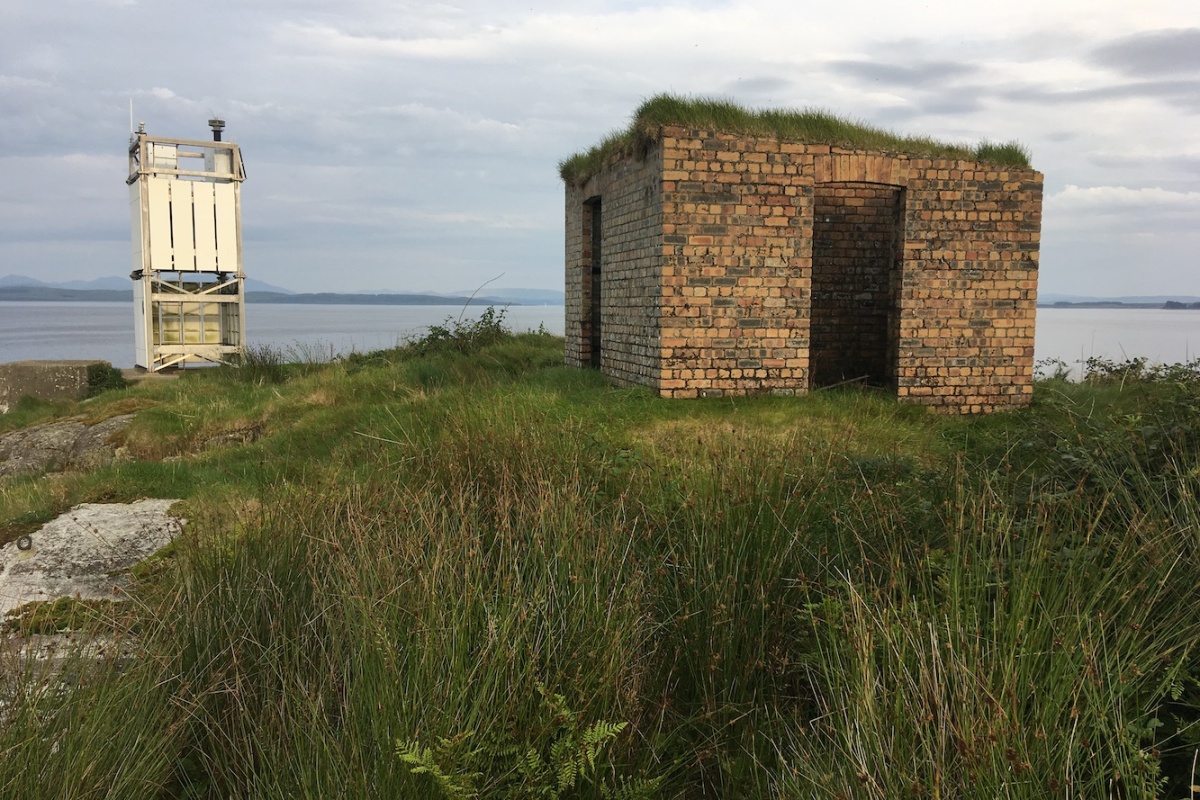 If there was one light that had been bothering me for a while then it would have been Bunessan, which is on an island just north of the village of Bunessan on the Ross of Mull. It was the last one in the area from Mull to Islay that I had left to visit, or even see. Fortunately it tied in quite nicely with some islands off of the south west of Mull that had been bothering some island-baggers for a while too. Our good friend Mervyn got in touch to say that he was organising a trip there with Coastal Connection (a great boat operator based in Oban who got me out to see Dubh Artach and Hyskeir among others a few years ago). Of course we jumped at the chance.

Yesterday was the day that we’d set. We’d been warned that the trip was expected to last 12 hours. That’s quite a long day for one lighthouse, but when they’re bothering you then you do what it takes. Heading out from Oban we saw the Pharos berthed at the Northern Lighthouse Board Depot and a short while later we passed the lighthouse on Sgeirean Dubha in the Sound of Kerrera. We were aware that it might be choppy going out, but should calm down as the day progressed. Arriving towards the south west of Mull the lads began their bagging while I watched, read and slept mostly.

After nine hours it was finally time to conquer that troublesome lighthouse once and for all. There was still a bit of movement in the water around the island and a few people got wet feet because of it, but landing on the rocks on the north east corner wasn’t too bad. Fortunately Bob took a leap of faith, as he tends to do, onto the island to help get us on. Once we were beyond the rocks we were in some of my least favourite terrain, vegetation of all shapes and sizes and you have no idea where you are putting your feet – the random holes don’t help either. There was also a section where you had to go down a sloped section and then back up the other side. I’m not ashamed to say that using my bottom did the trick!

We were greeted by a standard flat-pack lighthouse at the end and we decided to attempt to establish how many people we could fit around the lighthouse with arms outstretched – a game played formerly on Rona and the Crowlin Islands. Although I didn’t check everyone’s positioning I was led to believe that it was 8. Following that we appeared to play a brief game of Ring a Ring o’ Roses around the tower, although I’m not entirely sure why! It was nice to finally be there and everyone else had got off of the boat too, so there was plenty of good company. The walk back was uneventful and the bottom was utilised again. We celebrated me finally reaching that one with cake once we were all back on board.

I heard that we were bound for the Sound of Mull and assumed that there were some islands there that others had left to do. I’ve just been informed that it was actually to make up some time as the sea was expected to be calmer around that way, so off we set. As we sailed up along the northern side of Mull I could see Ardnamurchan lighthouse from a distance and then the lighthouse at Ardmore Point, the most northerly tip of Mull, came into view. Once we were around the corner there was Rubha nan Gall looking as lovely as ever.

I discovered around this time that a plan had been formulated between Mervyn and Bob to land on both Eileanan Glasa and Glas Eileanan in the Sound. Both of these boast lighthouses (known as Green Islands and Grey Rocks respectively) in case you were wondering. The first one we came to was Green Islands and you can see where it gets its name. All of the islands in the Eileanan Glasa group have two different colours of rock topped with lovely green grass. It struck me as a bit like Little Holm in Shetland which we visited back in June. They are all small, but perfectly formed. Again the landing was easy and it was another flat-pack lighthouse, one that’d only seen from the sea previously. It’s always good to get closer to these ones, especially when the sea had calmed down as much as it had. There was no swell at all by this point.

Onwards we went to Grey Rocks lighthouse. I was really pleased to be getting onto this one as, again, I’d seen it from the sea, but never landed. This one has a neighbouring building that we’ve not been able to find out any information about. There were plenty of barnacles on the rocks to cling to as we made our way from the tender to the lighthouse. At one point the vegetation got a bit thick, but it calmed down once you reached the little building and the lighthouse. The building appears to be split into two parts. It is brick built with a couple of doors and windows. The actual windows and doors had long since disappeared as had the roof, but it was just nice to see a different building in the area.  It also creates quite a nice image of an old, ruined building next to a very modern looking lighthouse.

As far as I was aware that was it for the day and we would then be heading straight back to Oban. However something caught our eye on the way so we got a little waylaid and decided to go for a quick ad hoc stop on Lady Rock which features a rather unique lighthouse. The tapered white base with a standard flat-pack section of framework on top, but that framework was covered in red rather than white panels. There was a lot of seaweed about near where we landed, but it didn’t seem too slippy. There was also a lot of bird “waste” on the rocks, but we made it to the tower just fine. It’s only when you are standing next to it that you realise how much bigger the lighthouse is than you think. There’s a ladder going up the side, which looks significantly taller than most other lighthouse ladders!

As it was getting late and we’d already been out for over 12 hours it was time to get back on dry land. What a fantastic day it’s been with one successful bag that I’d hoped for plus three bonus bags. Huge thanks to Mervyn for such a brilliant day and to the guys at Coastal Connection too! 🙂