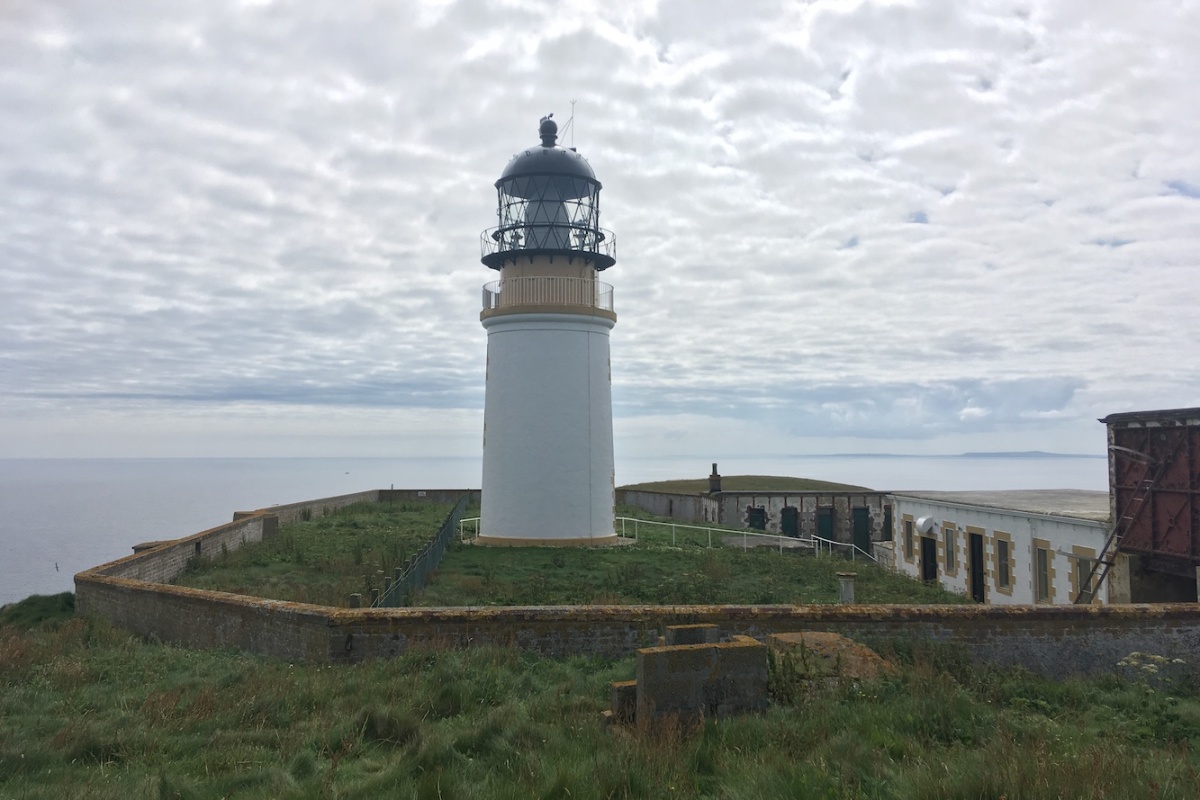 It feels like a long time since I wrote a post on here although it’s really not been so long at all. It’s been a busy year though, but I’m delighted that it’s nowhere near over yet for my lighthouse adventures.

Gathering a small group of island and lighthouse baggers, we set off for Orkney last night and were delighted to see that the forecast for our entire five days on Orkney was looking calm and dry. The mist that had plagued the area for a few days earlier in the week had also lifted. With a report from the Paul at Northerly Marine Services that it was due to be flat calm, it was all looking very positive for my endeavour to “tidy up” all of the Orkney lighthouses I’d yet to do that weren’t covered by scheduled ferries. On the way to Stromness from Scrabster last night we, of course, spotted the two lights on Graemsay as well as Sule Skerry shore station, which was fantastic. I grow fonder of Orkney every time I visit.

This morning we watched Paul’s boat, Sula, glide into Kirkwall Harbour this morning, and a short time later we were off, waving goodbye to the little old Thomas Telford light in the harbour. Our first two stops were the islands of Muckle Green Holm and Linga Holm, neither of which were home to lighthouses, but the island bagger were pleased to land on those two.

In preparation for the trip, I’d been in contact with the monks at Golgotha Monastery on Papa Stronsay. They were happy for us to go, so that was our next stop. As soon as you arrive at the pier you are greeted by welcoming signs and as you walk through the grounds there are some lovely little touches that have been introduced since the monastery was established after purchasing the island from a cattle farmer. We met one of the resident monks who was very kind and welcoming and wished us an enjoyable time on the island. That sort of thing really enhances your enjoyment of these places. It was a bit of a walk to the lighthouse, but all relatively flat so quite nice really. The island baggers headed off to the high point while I continued on with my flat-pack partner in crime. This one was fairly standard, as many of them are, but again in a great location. The island baggers joined us a short time later and it was great to see them wanting to visit another flat-pack lighthouse. Bob has always been interested in visiting them anyway (even if it is mainly just to get me there), but the others in the group seemed pleased too. It’s a fantastic island with a lovely feel about it.

After leaving Papa Stronsay we made a stop on Stronsay itself while the island baggers got a pre-arranged taxi (organised by the really helpful skipper) to take them closer to the high point of the island.

Heading south our next stop was Auskerry. I’d seen the lighthouse on Auskerry from the ferry to Kirkwall from Lerwick in late June and realised how beautiful it was then, so having the opportunity to visit it was great. I’d contacted the owner of the island a few weeks ago to check that she was happy for us to visit and fortunately she was. Landing on the island, as was the case with all of the lighthouse islands today, was really straightforward, just step off of the boat onto the slipway. From the landing it is a really short walk to the lighthouse, and what a lighthouse it is! There’s something very elegant about it. It looks different with its band of bamboo/buff etc. underneath the very top section of the lantern. It’s a tall tower and you can see why when you realise how flat the island is. There were some sheep roaming in the fields around the lighthouse (and we spotted the old sun dial in the neighbouring field), but we all tried not to bother each other too much. The best view of the lighthouse is from the beach side, particularly with the position of the sun as it was at the time. There are the remains of a wrecked ship at the coast here too. As we arrived back at the slipway we spotted the owner of the island who lives there. It was nice to meet her. What a life she must have, living there with her family. The certainly are keeping the buildings attached to the lighthouse in good condition, which is always lovely to see.

It was time to leave Auskerry, but onwards we went as the next island that beckoned was Copinsay. As opposed to the flatness of Auskerry, Copinsay rises up gradually from sea level on one side to rather high cliffs on the other. In that way it was very reminiscent of Barra Head lighthouse. It’s a bit of a stroll up to the lighthouse, but entirely worth it. We stopped off at the helipad on the way and checked out the panoramic views from there – it really was lovely weather by this point. The lighthouse came closer and closer until we were there and I headed up to the highest point of the island to get a wonderful view of the tower standing there alone with some fantastic clouds above it. It’s not a big tower, it doesn’t need to be, but what it lacks in height it makes up for in general appeal. Once I’d left the high point and made my way down to the gate, during which time I squealed about a bonxie flying nearby and dashed to the nearest person to hide, I had a beautiful moment I can only describe as the “grand reveal”. Although I had already seen the lighthouse, I was not expecting to be quite so taken aback by how wonderful it looked when I came around the side of the building it was there in front of me, sitting up on the raised grassy area. Although it’s not tall it is fairly imposing from below.

The buildings around the lighthouse are, unlike Auskerry (but again like Barra Head), looking very sad and neglected. We learned from the boatman that they are actually owned by different people, not all the Northern Lighthouse Board. It is such a shame to see it left like that looking so shabby, particularly when the lighthouse has recently been painted (for Princess Anne’s visit in the last couple of weeks). Still a wonderful place and definitely a major highlight for me today. The landing was ok, although there were some of the panels missing so you definitely needed to look where you were stepping. As we came back down to the boat I realised the tide had gone down a bit and I was worried we would have to go on the particularly dodgy bit of the landing area where bits are broken and missing all over the place, but it was fine.

An added bonus was our final stop of the day. We were talking about the plan this morning and there was mention of Copinsay and possibly Swona (which we didn’t get to). Bob just happened to ask the boatman if he would be willing to go to the Pentland Skerries to land on Muckle Skerry and it was only Bob and I in the group who had been there before. The answer from Paul the skipper was that it would be fine. Nothing has been any trouble for him today at all, which is perfect. He had not been to or landed on Muckle Skerry before, so was quite interested to go there. The sea was so calm today and had continued to be so. Unsurprisingly, the roughest stretch was after we entered the Pentland Firth when it got more choppy. It was still fine, but you certainly noticed the difference. As we had been there before, Bob told the skipper where the landing place was, which made it a lot quicker. Landing was fine again, although a little slippy on the rocks to start with. The next section of the walk up to the lighthouse involved a large number of rocks in step formation, which was massively helpful for getting up to the grass. From there you have a nice stroll towards the lighthouse.

Some of the cottages have seen better days. One of the cottages had a door open so we checked to see if anyone was in before we slipped inside. I noticed on the mantlepiece that there was some sort of black board with the names of the Principal Keeper and Assistance Keepers. It had a date at the top: 1994. Having just checked online, the lighthouse would have been automated in that year, so those three could very well have been the last keepers at the lighthouse. I also walked around the walled gardens a bit to establish where the graveyard is, but I didn’t see it. I think we are all aware that the tide was dropping so we didn’t want to leave it too late in case the boat dropped too low next to the landing area. It’s a brilliant island. I could just do with a bit of a longer trip there to find everything on the island, which is bigger than it looks!

We all left Muckle Skerry feeling very happy with our achievement and the day in general. We did wonder if we could manage a visit to Helliar Holm on the way back to Kirkwall, but the tide had dropped a lot, so it would have involved some effort to have got up onto the slipway (for me anyway with my short legs)! We decided to leave it until first thing tomorrow when the tide will be higher. I was pleased to get close though as the light on it was amazing. I think it’s a beautiful tower anyway, but bathed in yellow-y light, it was even better.

Something fun to look forward to tomorrow after such a successful day today! 🙂