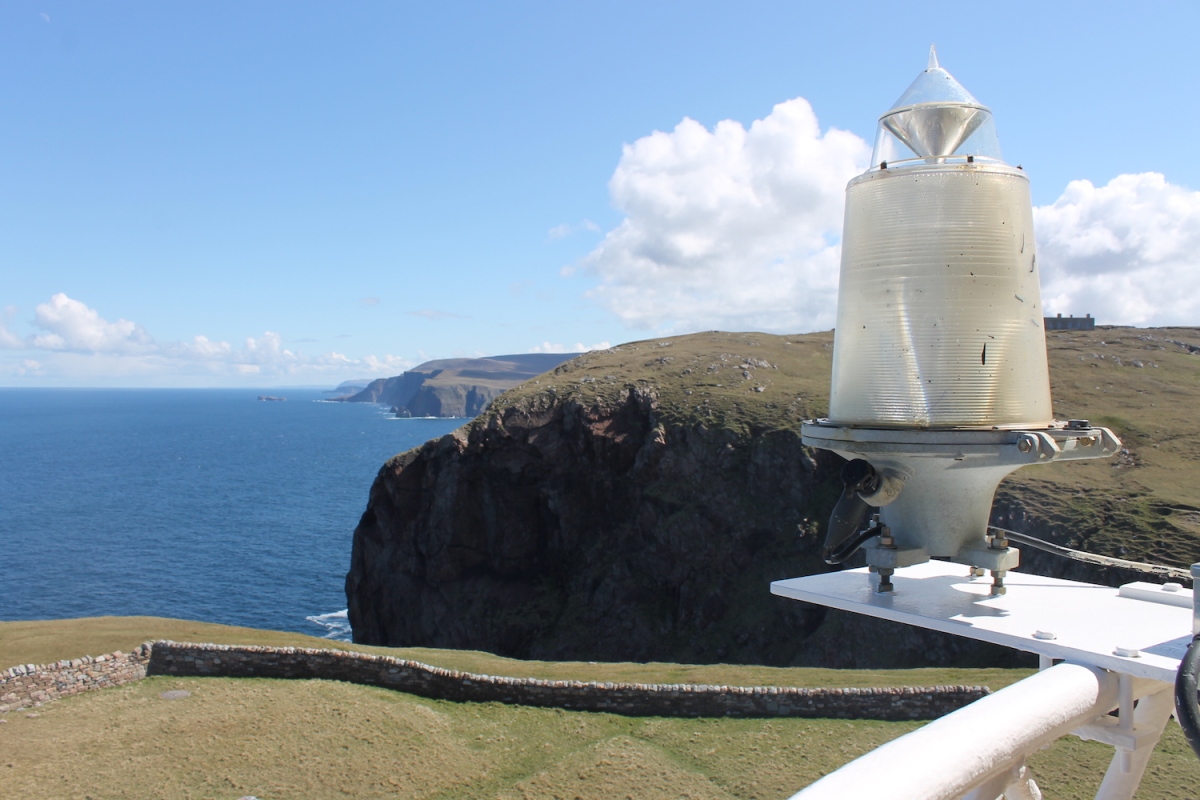 Many of those who regularly read this post now won’t be aware of my first visit to Cape Wrath lighthouse, which became possibly the most life-changing day I have ever experienced – although I never realised it at the time. Well, today was the first time I had returned to “the Cape”, as the locals affectionately call it, since that day. Although this time was the same in terms of weather, that’s really where the similarities end. For a start, last time I was travelling alone while this time I was with 15 fellow Association of Lighthouse Keepers members, also known as my lighthouse friends.

I’d pre-planned everything for this trip with the man who runs the ferry across the Kyle of Durness, the guy who runs the minibuses up to Cape Wrath and the Northern Lighthouse Board with their member of staff who was coming to meet us and show us around. Last time, I just turned up on the day in the hope that I would get across.

The crossing today was just as calm and quick as I recalled it being back in 2012 (the sun was shining then too), but I was quite happily chatting away to the driver and one of my friends in the front of the van all of the way there. Last time I sat in a single seat at the back of the bus and I don’t recall speaking much to anyone else during the journey. The road is still bumpy, but not as bad as I had expected. The guys who run the minibuses have been patching up the potholes left over from the winter and have done a great job. I was nicely surprised at how comfortable it was, although I’m not sure those further back would agree with that. The gorse is looking beautiful at the moment and it was fantastic to see the road winding off into the hills ahead of us. There are some interesting little points of “interest” along the way. I won’t mention any of them in detail here as I wouldn’t want to ruin the fun for anyone reading this who has never been but plans to go.

There is evidence of military occupation at a number of points along the way, but the place that really interested us was the old stone bridge that was built by the Stevensons in order for the lighthouse to be accessible, and even built in the first place! The minibus driver told us that the plan was originally for the landing point to be built closer to the lighthouse, but they discovered that it’s a very difficult area to land at in the winter. They chose another spot a bit further around, but again that wasn’t ideal. It was only then that they opted for the current location of the jetty, opposite Keoldale. This clearly worked well and still does. We stopped just after the bridge and got out to take some pictures. It’s incredible to think that the other bridges along that road are either relatively new or have had to be replaced, but the Stevenson bridge is still going strong. There are great views from the bridge too.

After around an hour we reached the lighthouse and headed straight to it to kick off the tours. We weren’t allowed to go right to the top of the tower today as it is still a construction site, but it was possible to see the light arrangement from the next level down. The light features a set of bullseyes on one side of a black frame. I am sure it has a technical name, but I’m not sure what that is. As with my previous two posts, it’s always easier to show these things in a picture rather than go to great lengths to describe them.

The control room is quite full in comparison to some of those we have seen recently. It has varnished wood-lined walls, which I am not used to seeing. The door to the balcony was open so I took a little wander around out there. The views from up there were fantastic today, particularly looking back along the coastline to the east with the headlands of varying heights, shapes and lengths jutting out one behind another. You know you are somewhere very special with a view like that.

Back down at the bottom of the tower it was lunchtime and the Ozone Cafe had a really impressive selection available. I ended up with quite a big lunch, which I struggled to finish in time for getting the bus back as I was talking too much and sorting out minibus arrangements. Again, very different from my first visit when I ate very little and didn’t really talk to anyone for any length of time.

The return journey this time was very similar to the outward journey except I talked to the driver even more. My return journey seven years ago, however, was where it all got a bit more interesting. I won’t go into great detail here (you can see the original explanation here), but a significantly abridged version is as follows: we stopped about two thirds of the way back to the ferry to let a man (we’ll call him Bob because that is his name) on and when we got to the ferry he chatted to a couple standing next to me. Once we were off of the ferry we spoke for a short time. I didn’t know much about him at all, but later managed to track him down online and sent an email. That was the start and now, seven years down the line, we are married with two children. As I said, it was a life-changing day. Today I actually met the man who drove the minibus 7 years ago and got the chance to tell him the story, which he was really pleased to hear.

I could have spent far longer at the Cape today, but I am very confident that another return journey will take place in the coming years when Bob and I return to where it all began with a couple of little ones in tow. I just need to make sure it’s not another 7 years before I go back again.

Oh, I should also say that on the way to Durness today we drove around Loch Eriboll and stopped for a while to admire (well, in my case anyway) the flat-pack Loch Eriboll lighthouse. I appealed to my lighthouse friends to see the beauty of these towers and their wonderful locations, but I feel I certainly failed this time. Although they took pictures and looked a bit interested I don’t think they will be signing up to the flat-pack appreciation club anytime soon.

All in all, a really enjoyable day returning to a place that features in many happy memories, including some fun ones from this trip 🙂