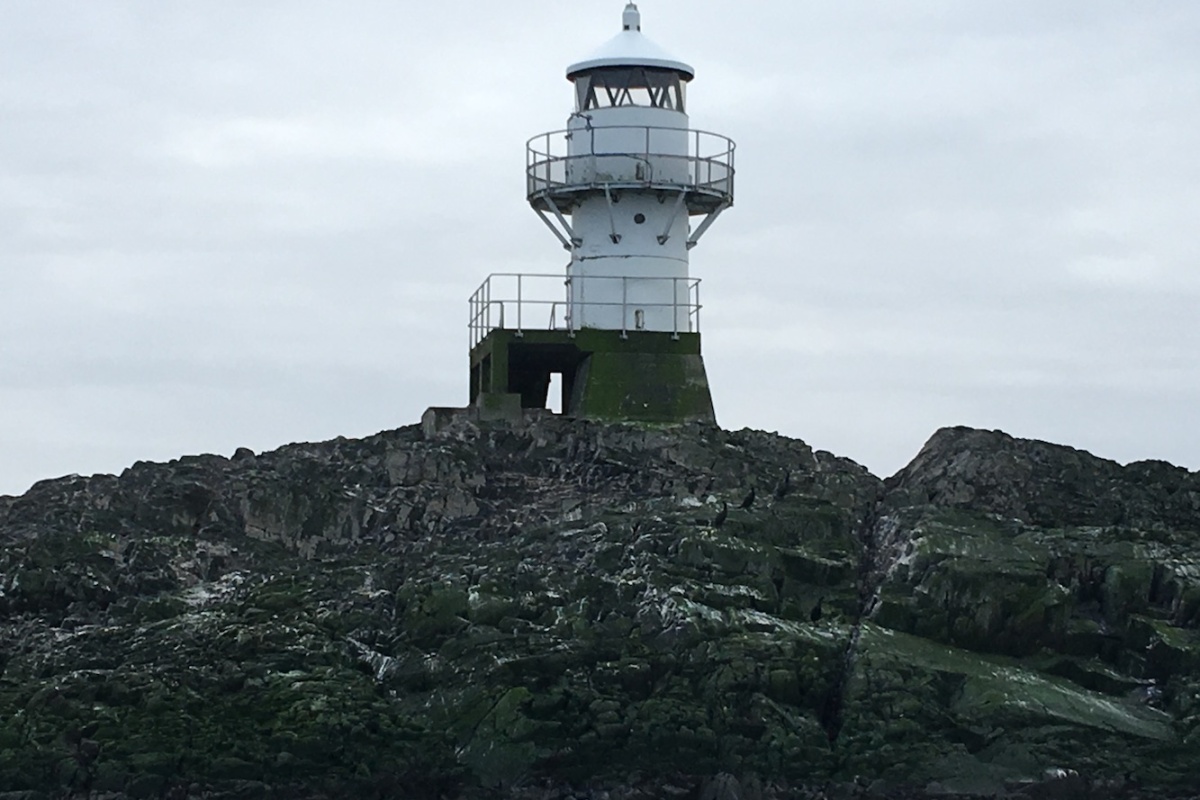 After such a fantastic couple of lighthouse days – or do I mean weeks, or maybe even months?! – I needed to gently be brought back down to normality. Today has been the day for that with a short boat trip to see a couple of minor lighthouses at the north end of the Sound of Jura.

Craignish Cruises were the boat operator of choice for today’s trip from Ardfern. Originally it was just going to be me on the boat while Bob manhandled the kids. Having seen details of the boat (a heated cabin!) online last night we asked Lindsay, who owns the boat, if he would be happy for the kids to go too. He was fine with that, so off we set.

It’s not quite so easy bagging with young children and the constant demands, but it helps towards my plot to turn them into the next generation of lighthouse baggers. The bagging is definitely strong in the eldest. The younger one still needs some work!

The tide was against us on the way out, but it wasn’t too long until we arrived at the tiny island of Ruadh Sgeir. It was interesting hearing the opinions of both Lindsay and Don who was helping him out on the trip. Lindsay has always thought the light was quite sweet (he seems quite fond of lighthouses, even the small ones, from the point of view of someone who uses them for their intended purpose – aiding navigation). Don, on the other hand, said he thought it was just a light on a rock. I think it deserves more credit and, I’m sure, by the end of the trip he was beginning to see the beauty of lighthouses, even the small ones. It’s quite common for boatmen to say that they have travelled along a stretch of coastline frequently and never noticed the lighthouse. They just need to be enlightened (no pun intended), that’s all.

I really like the Ruadh Sgeir light. I’m a fan of this type, and I always think there is a lot more to them, in terms of design, than they get credit for. It’s not just a small white tower that’s been dropped on a rock.

Our second stop was Reisa an t-Sruith. Lindsay told me this translates as ‘island in the strong tidal current’. There is certainly a lot of movement in the area, in terms of tides. It looked a lot choppier than it felt. Like Ruadh Sgeir, Reisa an t-Sruith is just a small island, a slightly bigger small island than Ruadh Sgeir. The lighthouse is a standard Northern Lighthouse Board flat-pack. Not much more to say about it other than that. It replaced a light designed by David A and Charles Stevenson. The island itself is home to some goats who watched us from afar, probably wondering what on earth we were up to. I’m assuming they don’t think much of the lighthouse!

As well as the goats, our wildlife tally increased again today with a brief appearance of a pod of 4 to 6 bottlenose dolphins.

A short, but important trip. It marks a first round completion of the wonderful lights of the Islay and Jura area. In such a short space of time, it’s been quite full-on, but not rushed. I definitely want a closer look at the Rinns of Islay at some point, but for now I’m satisfied – and of equal importance, I got those much-needed pictures for my book.

This afternoon we paid an enjoyable visit to Ian who served on Skerryvore lighthouse and who visited that very lighthouse with us last year (see this post for more on Ian). He and Doreen are wonderful hosts and it was lovely to catch up with them.

Now back to reality. I always put a smiley face at the end of these posts and I’m going to do the same for this one as it’s been a good day and I’m hopeful that it won’t be long until my next post. There certainly is plenty of lighthouse fun lined up for the year 🙂

One thought on “Minor lights of major importance”