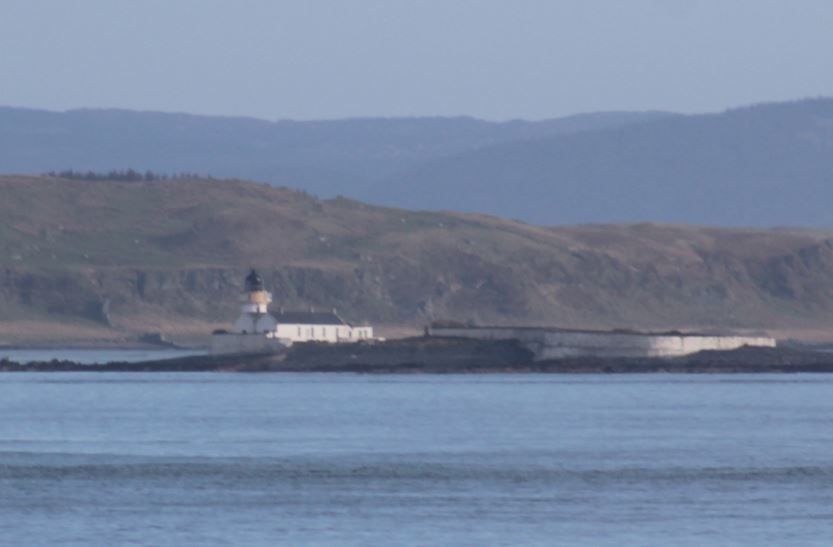 Over the Easter weekend, Bob and I organised a trip over to Colonsay off of the west coast of Scotland. Surprisingly, neither of us had been their before, although Bob had sailed into neighbouring Oronsay to bag the highest point on the island.

Starting our journey from home, we took a leisurely drive down to Oban for the ferry, stopping in Glencoe for lunch and taking a look around the old Ballachulish Slate Quarry. The weather was beautiful and we were even treated to a clear view of Ben Nevis and it’s surrounding mountains when we passed through Fort William.

The ferry ride over from Oban to Scalasaig on Colonsay gives you a great taste of the beauty of the islands in the area. We were able to see across to Mull, Scarba, Jura and Islay on the way there as well as many others. We were able to spot the lighthouses on Fladda and the south west end of the Garvellachs on the way as well as Ruvaal lighthouse on the northern point of Islay as we approached Colonsay. Of course, we also spotted Rubha Dubh lighthouse when we arrived, which is located just to the south of the harbour in Colonsay.

Once we were on the island, we decided to go for a drive around the island before checking into the island’s only hotel, the Colonsay Hotel. The drive didn’t take us long as the island itself is only 10 miles long and 2 miles wide. We stopped off near Kiloran Bay, which we planned to stroll along to get to the island high point at some time over the weekend. The sun was going down and we spent a while enjoying the views and then headed to the hotel.

The following morning we started off the day with a wander across to the lighthouse. There are some fantastic rocks around the bottom of the lighthouse. It is the type I quite often call “flat pack”, but the surrounding scenery and views across to Jura and Islay made it all worthwhile. We then enjoyed sitting on the small harbour beach for a moment. We stocked up on supplies for the weekend at the small general store and then took a drive to Machrins beach where we went for a wander as the tide went out.

Our next plan for the day was to take the walk across to Oronsay at low tide. There is a space of around 4 hours when it is possible to walk across to the island. We set off shortly after another couple, noticing that they had wellies on while we were just in trainers and walking boots. The stroll across the 1 mile(ish) stretch of sand was lovely until we got to the point where the water was coming up to our ankles. Our solution: take our shoes off, roll our trousers up and go for it. The water was cold and, at one point, Bob very kindly gave me a piggy-back across the deepest section. It was greater fun though and, again, the weather was perfect. Once on the island we walked along the main path to the south side of the island and the priory, where we were able to see the northern-most point of Ireland to the south. Stopping there to look around and have a mini picnic, we then began the walk back to make sure we made it back across before the tide started to come in. The walk back was a little less cold and we walked the whole distance without shoes on – as did everyone else, it seemed.

Before we called it a day, we paid a visit to the bookshop and the brewery. We enjoyed a lovely meal at the hotel that night with views down to the harbour and islands in the distance.

The following day our main aim was to reach the highest point of the island. We noticed the cows next to the main path so we decided to access it from the beach instead. The tide was a bit stronger that day, but it was still beautiful sunshine. The walk up to the high point was fairly straightforward and we had some amazing views, including an almost birds-eye view of the large whale that has been created off to the north west of the hill which people add stones to regularly to try to fill in. We were planning on walking to it after leaving the hill, but decided against it when we realised we were unlikely to get a better view of it from ground level. On our way back along the beach we took our shoes off again and Bob went for a paddle while I did my best to avoid the cold water.

Driving back around the island we stopped off at a couple of standing stones in a field at the side of the road. Bob then walked up a hill called Beinn nan Caorach near Machins beach while I followed his progress with the camera from the car park. We returned to the hotel again for lunch while an Easter egg hunt was going on in their garden. Our next stop was the Woodland Garden at Colonsay House where we saw all sorts of plants and flowers and had a short spin (and it was a spin) on a rope swing. Our final walk for the day was Beinn nan Gudairean which offered fantastic views in all directions from the viewpoint. I sat and enjoyed the sunshine while Bob dashed off to bag the trig point. We then had dinner at The Pantry before boarding our return ferry.

We spent that night in Oban and decided to go on a minor detour the following morning before we started the drive home. We drove to the Isle of Seil, crossing the Clachan Bridge (a Thomas Telford construction also known as The Bridge Over the Atlantic’. Bob was keen for us to hop over to Easdale, a small island off of the west coast of Seil and so we caught the little boat over and spent a while wandering around this fascinating little island. I was very amused by all of the wheelbarrows near the harbour, which the residents of the island use for carting things about. We walked around the circumference of the island, seeing the old slate mines that became disused when they were flooded. We bagged the island high point (of course) and then stopped at a lovely little café before we got the boat back.

Our penultimate stop on the trip was the Sealife Centre north of Oban. The three seals there were adorable, particularly the one that came to see us at the side of their tank (we think she might have been called Pippa). We also saw a couple of otters, crabs, seahorses, starfish, and some weird and wonderful little fish!

The final stop of our weekend was at Port Appin where we went to see the lighthouse there, which sits on a small island just off of the coast. I’d been here on my lighthouse tour, but Bob hadn’t and we also spotted the old lighthouse on display next to the village shop. The lighthouse at Port Appin was, in 2001, painted pink with yellow spots to show the local residents’ anger at the lighthouse being under threat. It was due to be replaced by one of the “flat pack” lighthouses, but fortunately the residents won in the end. Apparently the residents have threatened to do the same again this year in protest over a new sewage pipe being installed along the coastline. We’ll have to wait and see what happens!

So, that was our weekend. We certainly crammed a lot in, but we also made the most of the weather and had a brilliant time! 🙂