What a simply lovely day!

I reached Wales at around 9.30 this morning, which was very exciting. There were a couple of lighthouses scheduled for today that I was looking forward to. The first of which was Point of Ayr lighthouse (pictured) at Talacre. I’d read a few things about this lighthouse, the first of which was that a man got stuck in the sand on the approach to the lighthouse the other day. It also has a very strange, and a little bit creepy, iron man on the balcony. I must admit that the sand was a bit “marshy” in places, but I was sensible and kept moving so it didn’t have the chance to suck me in. The lighthouse is in really bad condition. I think the owners have been trying to sell it for a long time. However, it must just have to be one of my favourites purely because it’s got so much character.

I was very fortunate at my next stop, Great Ormes Head. You have to pay a toll to drive along the coastal road, Marine Drive, but it’s completely worth it. There are some fantastic views as you drive along. They have a visitor’s centre, cafe and, of course, the lighthouse, which is now used as a B&B. I turned off towards the lighthouse and, fortunately, the owner was hanging around and let me in. In general it’s not open to the public, but the guy let me have a look around and we chatted for a while about lighthouses. Wonderful!

I was also very much looking forward to my next stop, Trwyn Du, which is just north of Beaumaris. On the way there I drove through Beaumaris and stopped for some crumpets in Beau’s Tea Shop, which has featured on Hairy Bikers. Very good crumpets and a cute little place. Again there was a toll on the road to Trwyn Du and, again, it was worth the price. The lighthouse is black and white striped and sits happily between the mainland and Puffin Island. It also, I noticed, has a bell which was ringing while I was there as a boat sailed past. Really lovely place and another lighthouse with its own character.

Every day must have its down point and mine today was Point Lynas. The lighthouse (which you would never guess was a lighthouse from a distance) is on private land so I wasn’t able to see it close up. There are some stunning views nearby though with a small bay that was fairly quiet. It’s very out of the way, so I guess not many people know about it.

To follow this up, I was unsuccessful in Amlwch. My book told me that there was a small light on the end of the pier, but I wasn’t able to see one from the other side of the harbour. Apparently they also have a memorial gravestone in a nearby church for the lighthouse. I think this is a bit weird, but I visited the grounds of the church anyway. I couldn’t see anything outside so it must be inside, but I’m not here to see churches now, am I?!

I then made my way towards Holyhead. After stopping briefly at the campsite to set up my tent, I drove on to South Stack. I was looking forward to it and just about managed to see it from a distance when a really heavy sea mist appeared and didn’t look like it was going to shift, so I shall go back to that one in the morning.

I then made the short trip to Holyhead to see the lighthouses on the breakwaters. The mist was starting to creep in there as well, so I had a quick look and headed back to camp.

So, tomorrow I’ll head for South Stack first thing and then on to Llanddwyn before a leisurely (and long) drive through Snowdonia National Park (via Porthmadog and Portmeirion, of course)! Good times! 🙂 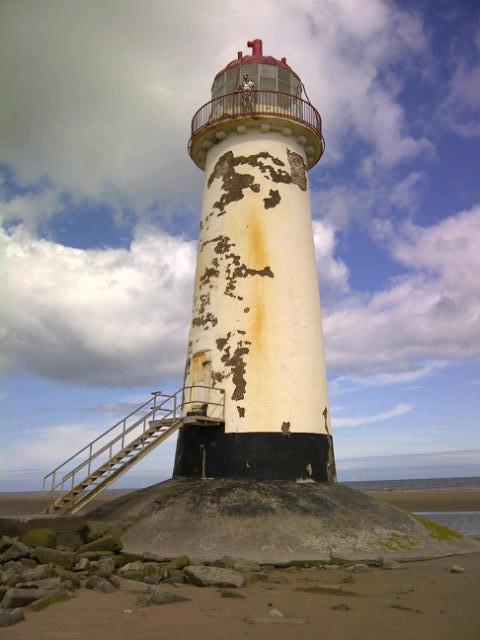