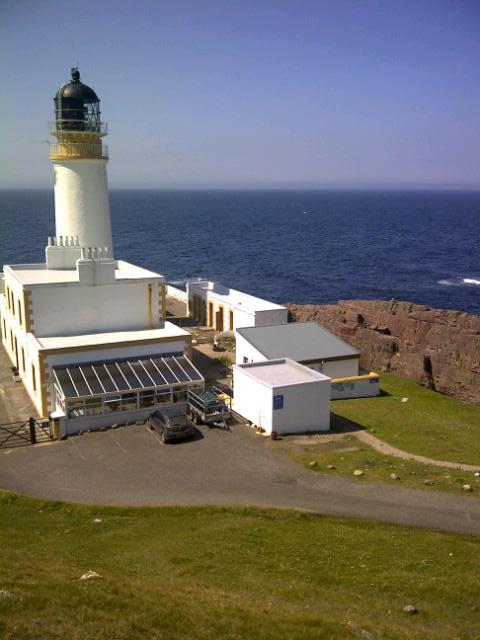 You may be intrigued by the title of this blog, but I will come to that shortly.

First though, on the way to my first stop of the day Little Car had her second bump (or should I say scrape). It was completely my own fault, I thought I was just about clear of a wall as I was turning around, but apparently not. She’s ok and still running fine, just quite scratched and a tiny bit cracked too. I apologised and she seems to have forgiven me.

Rhue was an interesting stop. Firstly, because it was very brief. It’s a tiny little village near Ullapool and there are probably about two roads there, I think. What was most interesting though was that it was the only place I’ve encountered today that was foggy. It was really quite bizarre. I managed to spot the old lighthouse in the mist, so that was fine.

My second stop was Rua Reidh. Now, I know I’ve been harping on about these one-track roads and how scary they are, but today’s just topped them all. It was really quite petrifying as the road, in places, ran just alongside the side of the coast. Luckily I didn’t have to pass anyone. If I had then I might have just stopped, got out of the car and told them to reverse my car into a passing place for me (in reality I probably wouldn’t have done that, but you get the idea). The lighthouse (pictured) was in a wonderful location though and made the scary road seem worthwhile. It’s actually used as a hostel and has a really cute little visitor’s centre, which is mainly focussed around the birds and sea creatures spotted from the lighthouse. Whales and seals had been seen recently!

The drive to my next stop, Neist Point on the Isle of Skye, was going to be a long one so I set up my tent in a campsite a few miles from Skye Bridge (as there didn’t appear to be any/many campsites on Skye itself). On the way here there were two hitchhikers at the side of the road (in different places). I mouthed ‘sorry’ to both of them and the first one seemed fine, but the second one stuck his finger up at me. How very rude and how dare he! Does he not know that a lone female should never trust a hitchhiker? Idiot!

Anyway, I still can’t decide whether it was a good idea to then go ahead to Neist Point, but I did it anyway. However, after driving for 2 hours I finally got there at about 7pm to find that the lighthouse wasn’t visible unless you walked somewhere (it wasn’t clear which way), so I decided to leave it, enjoy the scenery for a bit and then head back to the tent. So, I’ve techincally been in the same area as Neist Point lighthouse, I just haven’t seen it!

Tomorrow I head back to Skye to check out the lighthouse under the bridge and then south. Fingers crossed I will also reach Ardnamurchan, which absolutely everyone tells me is simply beautiful. Watch this space! 🙂