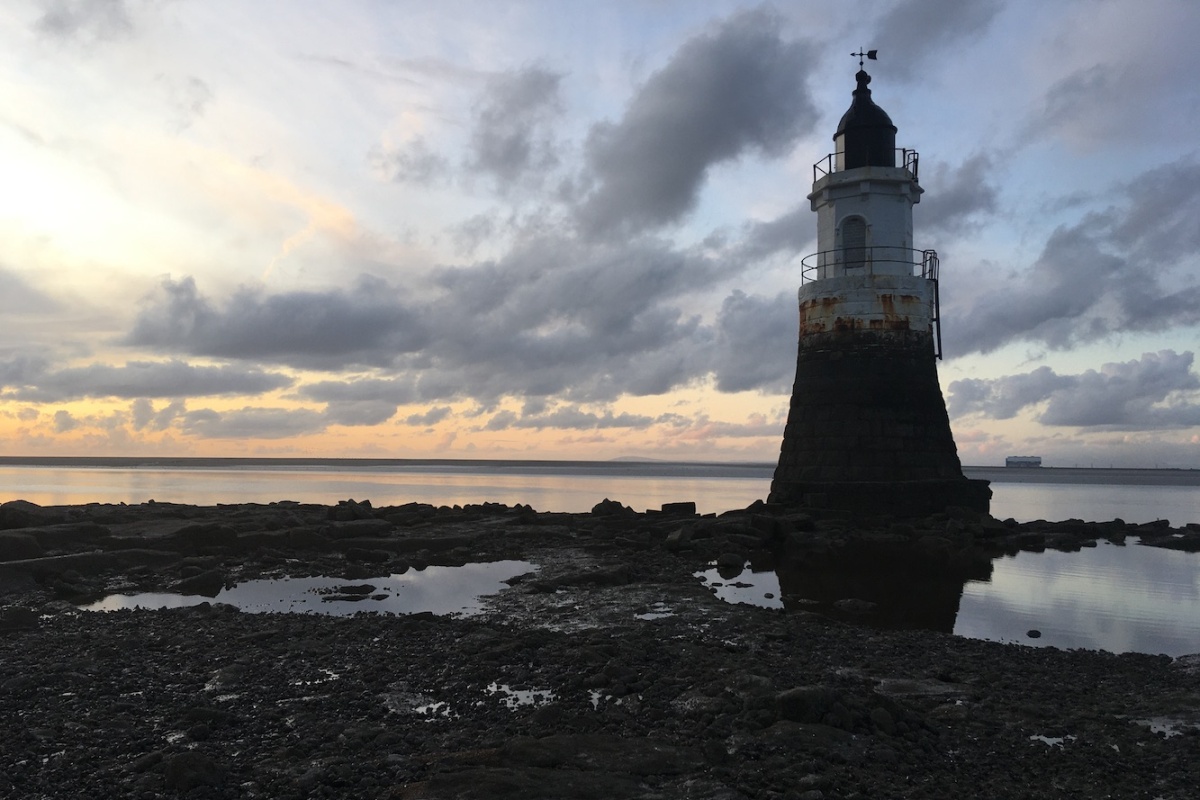 It’s a long way from the north coast of Scotland to the Isle of Wight and, particularly with two young children, regular breaks are essential. So why not tie these breaks in with visiting lighthouses?! We had to drive from Stirling to Leicester yesterday and, of course, if you take the most direct route you aren’t going to go anywhere near a lighthouse, so a bit of a detour was in order.

We decided to aim for Whitehaven as our first point. I’d visited back in 2012, but there was some sort of event going on in the harbour and there were far too many people around for my liking. I had just travelled around the coast of Scotland and got quite used to not seeing lots of people! As a result, on that occasion I didn’t do it justice.

This time we parked up and immediately headed for the south side of the harbour. We could see all three lighthouses in the harbour as we set off, as well as the watchtower, which is often mistaken for a lighthouse. The first one we came to was the Old New Quay light. It’s quite an amusing name: how can it be old and new, you might ask? Well, I believe it is related to the various stages of development in the harbour. There was the original quay and then the new one was built (the one with this lighthouse) as the New Quay. Then it was extended further with the north and west piers, so it became the Old New Quay!

They’ve done a lot of renovation work on this pier in recent years, with that particular effort completed in 2017. It’s looking good, in fact a lot of the harbour is. The two other lights need some work, but it was reported this week that funding has now been approved for improvements to be made to the towers.

Continuing on, we walked right out to the end of the west pier and what is probably the most well known of the Whitehaven lighthouses. It does need a bit of work done, but it’s going to look great once it’s finished. It’s quite an ornate tower. It reminds me a little of Smeaton’s tower. It’s nice that you can walk up the steps around the far side of it and see higher up the tower from the upper level of the pier.

From here Bob and the kids went to the beach to throw stones in the sea while I walked over to the north pier. On the way there I walked past the watchtower, another nice building. I particularly like the sun dial on the side.

Crossing over the lock, I then walked along to the north pier lighthouse. This is clearly the pier to use if you want to go fishing it seems, and the gulls knew it too! The tower at the end is a nice castellated affair with its year of “birth” on it. Another point for getting great views across the harbour from.

I’m glad I have now spent more time in Whitehaven. It’s a lovely harbour to walk around with a lot of points of interest.

Our second, and last, stop of the day today was Plover Scar. I’m not sure what had happened between me and Plover Scar, but I’d not taken any pictures of it back in 2012, although I did see it. It’s amazing when you look back at how little effort you put in during those early days when you really only care about the bigger lights. Clearly my lighthouse outlook has changed since then as Plover Scar had remained on my to do list.

It was always going to be a challenge, What with tide times and the fact that we were taking the kids, but Bob had researched the former and we would just have to deal with the latter as best we could. We spotted the top of the tower on the approach road and then it disappeared while we parked up near Cockerham Sands holiday park. There was a nice little path around the coastline from here. The lighthouse came into view and the tide was far enough out to enable us to reach it. There was, however, a field of cows ahead of us that the footpath takes you through. Neither of us trust cows and we knew we had to get down onto the beach at some point anyway, so we headed down before reaching the cow’s field.

The walk out to the lighthouse wasn’t quick, in part because we had the kids there, but they enjoyed the walk (or should I say “carry” in the case of the little one) out there. The tide was still receding as we walked out, but we were aware that it was due to change soon and the tide charts showed that it changed pretty quickly with the transition from low and high being fairly quick.

We finally reached the lighthouse and it was a great feeling to have made it. You can never really appreciate the size of a lighthouse from a distance and it was good to get up close to this one.

The tower was repaired and renovated after it was hit by an empty cargo vessel one night in March 2016. The lantern was removed that year for renovation works to be carried out on it and repair to the tower followed in 2017. It is certainly looking good now. What a pleasure it was to see it close up.

Although the walk back from the lighthouse needed to happen within a certain time frame due to the light disappearing and tide turning, it was still a fantastic walk to an excellent lighthouse. 🙂