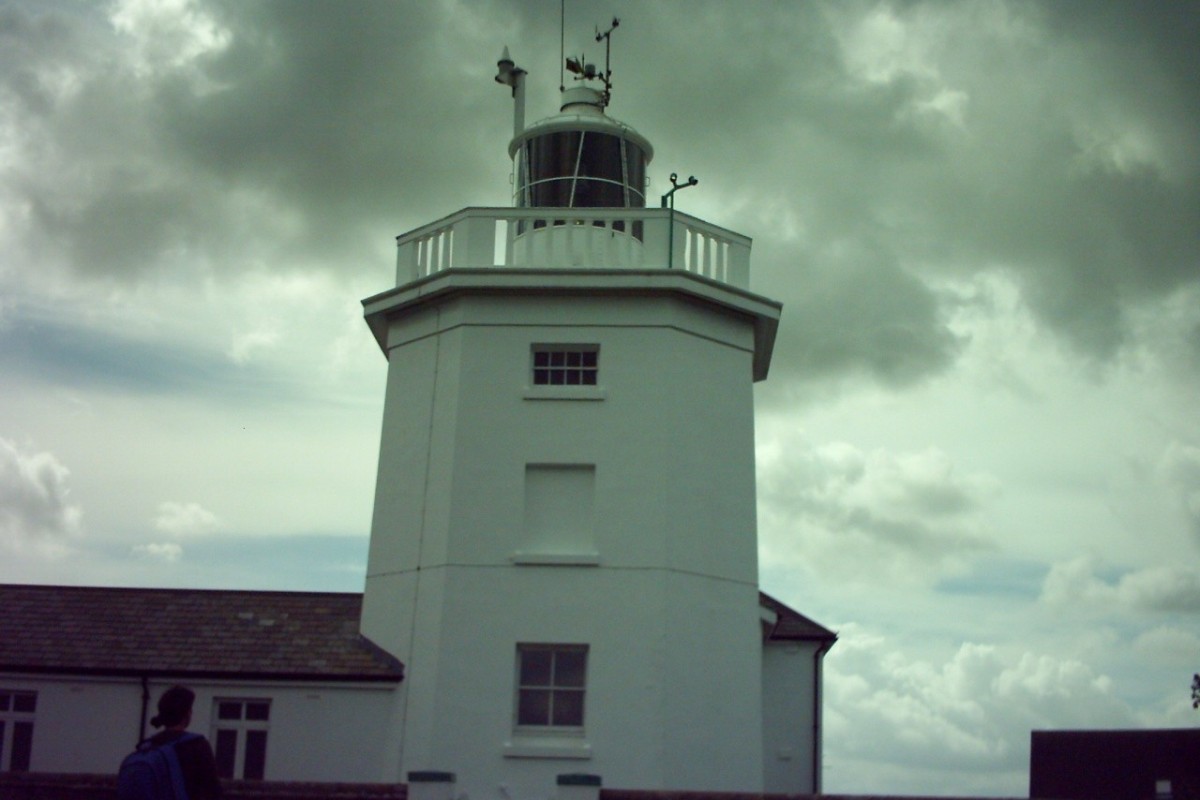 With the second Scottish lockdown in full swing and no chance of visiting any new places or lighthouses in the immediate future, I thought it might be a good time to reflect on the development and progression of my lighthouse fanaticism over the years, from the very beginning to where I am now. My lighthouse journey has really been life-changing and, equally importantly, has taught me a lot about who I am.

This is the first of four parts as there have been fairly clear turning points along the way which have seen me move on to a higher level of fanaticism. In this first reflective piece I will go right back to the beginning and aim to address the commonly asked question: what got you into lighthouses?

When I was doing promotion work for my book this question came up many times and I dreaded being asked it as my answer always sounds really flaky. It’s never been a question I’ve found easy to answer. Many of my friends with various interests can name a specific lighthouse, hill etc. that kicked off their passion. This was not the case for me.

Looking back, I remember feeling the draw of lighthouses in the early 2000s, but it was a passion that already had some sort of foundation at that point. During my childhood in the ’90s we’d been on a number of family holidays in Suffolk including Southwold, where the lighthouse has a very prominent position in the middle of the town, but the lighthouse didn’t really feature much in those.

In the last few months I spent living on the Isle of Wight before I left to go to university in 2002, I spent a lot of time outdoors exploring the island like I never had before. This ignited a passion in me for being outside, particularly by the coast, and this passion has never gone away. Although visiting the island’s lighthouses doesn’t feature in my memories of this period I knew I loved them, and when I moved to live in Weymouth later that year I always enjoyed going to Portland Bill and it was top of my to do list when I first visited the area.

In 2004 I visited Cromer Lighthouse in Norfolk where my grandparents were staying in one of the keepers’ cottages and I was really looking forward to seeing it. I made a point of taking some photos as I was so close.

I also finally got around to taking some pictures of Southwold Lighthouse on that trip too.

By 2008 I was well on my way towards lighthouse fanaticism. Living in London at the time I paid a visit to Trinity Buoy Wharf to see the old Trinity House training lighthouse.

I also dressed up as a lighthouse at a friend’s nautical-themed party on board a ferry that sailed around Plymouth Sound (excuse the picture, which was taken towards the end of the night, but it’s the closest I have of a full-body shot)!

These memories do little to answer the question, of course. To make it even more complex, I don’t know that I ever went to the effort of visiting The Needles or St Catherine’s lighthouses (the Isle of Wight’s two main lighthouses) prior to these memories. I was however more than aware of the Needles Lighthouse being one of the main attractions on the island and often encountered references to it and tourist paraphernalia featuring it as I was growing up.

It has been suggested to me that perhaps my love of lighthouses actually has always been there on a subconscious level, in large part due to the presence of the Isle of Wight’s lighthouses. In the same way that children who grow up by the sea find it so normal that they don’t even realise how much they love the coast until they move away from it. Perhaps the love was always there, it just took some time for me to realise it. I can quite believe that this is the case.

With hindsight I can now see that my increasing enjoyment of visiting lighthouses has very much run in parallel with my experience of growing up and discovering who I am. When I was young all I was sure of was that away from home and my family I was shy, quiet, prone to crying if I felt out of my comfort zone, and at times quite difficult to manage as a result. Home was where I felt secure and safe.

As I broadened my horizons by leaving the island and going to university, and then moving to London, I began to seek lighthouses further and further afield. My comfort zone expanded and my confidence grew. I no longer sought the security and safety of home, I wanted to explore – and it was lighthouses I wanted to see in those explorations. The more I saw the more I wanted to see, and this has continued to this day.

My increasing fascination with lighthouses has helped to shape me as a person and, even up until very recently, it has taught me a lot about myself over the years. It’s shown me how determined I am (my dad once referred to it as grim determination), how fixated I can become on something, and that I am really a ‘list person’ at heart. I am frequently reminded that the best people are.

In recent blog posts I’ve become very aware of how little credit and attention I gave each lighthouse as I was whizzing around so many – particularly in the early days of my 2012 tour when I only included one picture per post. The methods of posting on this blog then were somewhat different with me needing to send the text by email to a particular address and attach a picture to have that included at the end.

This week I am in East Anglia and, although I’ve seen a couple of these lighthouses a number of times they’ve not received the coverage they deserve on here. So I now want to rectify that.

Yesterday was a day for exploring the lighthouses of Suffolk and our first stop was Southwold. With grandparents living in the area, Southwold is a place I spent many a wonderful childhood holiday. Perhaps it was the lighthouse here, sitting proudly in amongst the houses, that contributed to my love of lighthouses. It’s hard to say, but I can certainly see that it might have been.

With all the times I’ve seen the lighthouse here I’ve not yet managed to make it inside and yesterday was no exception. It may well be closed as it’s now out of season or it could well be the pandemic, but either way I had to satisfy myself with an external view, but what a lovely view it is. With this one, although I love to see it close-up, the best views are the glimpses you catch of it above and between the roofs and the houses as you walk around the area.

With very calm conditions Joe the Drone was able to get an outing too. Bob attracted a bit of interest from passers by, which he’s not used to in the more remote places we go to in Scotland! My favourite view of Joe’s was taken from above the sea looking down on the town with the lighthouse standing proud. It was also good to see how it looked facing south with the shape of the coastline.

Our second stop of the day was Pakefield, which we managed to catch between showers. The lighthouse here is no longer active with the squat tower now used as a Coastwatch station. Again, this is one you can visit under normal circumstances, but the virus is currently impacting on that. Pakefield is the only lighthouse I’m aware of that you access through a holiday park!

Up went Joe again and captured some great images showing just how small the lighthouse looks in relation to its surroundings (unlike Southwold) and the beautiful coastline here that is so characteristic of the area.

Three lighthouses awaited in Lowestoft. Rather greedy of Lowestoft, but you will not hear me complaining. The two lighthouses on the end of the north and south piers in Lowestoft can be easily seen from the south pier, but you can’t get close enough to either to be able to touch them. The north pier is closed completely to the public while a fence prevents you from getting to the south pier light.

However, we had Joe and we weren’t afraid to use him – between rain showers again.

It was fairly overcast, but still good to get a different angle on these two and see the harbour from above. The harbour is far bigger than I ever remember it being.

With one lighthouse to go we continued north. As the lighthouse appeared among the trees on the landward side of the car I pointed it out to Bob’s surprise. I don’t think he’d expected it to be there and it’s another one that’s not in a standard location. It is right next to a main road on the west side and slightly further inland than you would expect. We parked up and wandered up through Sparrow’s Nest Gardens to get to it. This was rather good as I’d remembered the area being quite picturesque and filled with trees on my previous visit, but that time I’d parked to the north and so missed most of the nicest bit.

We strolled up the steps to the south of the lighthouse, which I think gives the best land-based views of the tower. From almost every other angle the lighthouse is obscured by trees. There is currently some work going on here with scaffolding covering the two buildings, which detracts a bit from the loveliness of it, but of course that’s only temporary.

We followed the steps up to the road, passing the lighthouse complex and then strolled back into the Gardens. We were delighted to see some fairly tame squirrels running about across the paths and on the grass.

That kept the kids and I entertained for a while as Bob went to the car to pick up Joe for his final flight of the day. From above you can really see how well surrounded the tower is by trees, and you also get an idea of just how big Lowestoft is, which amazed me.

It had been a lovely day of revisiting a few old friends, now with my greater appreciation of these structures and their wonderful surroundings. It’s nice to do these things at a slower pace every now and then. 🙂