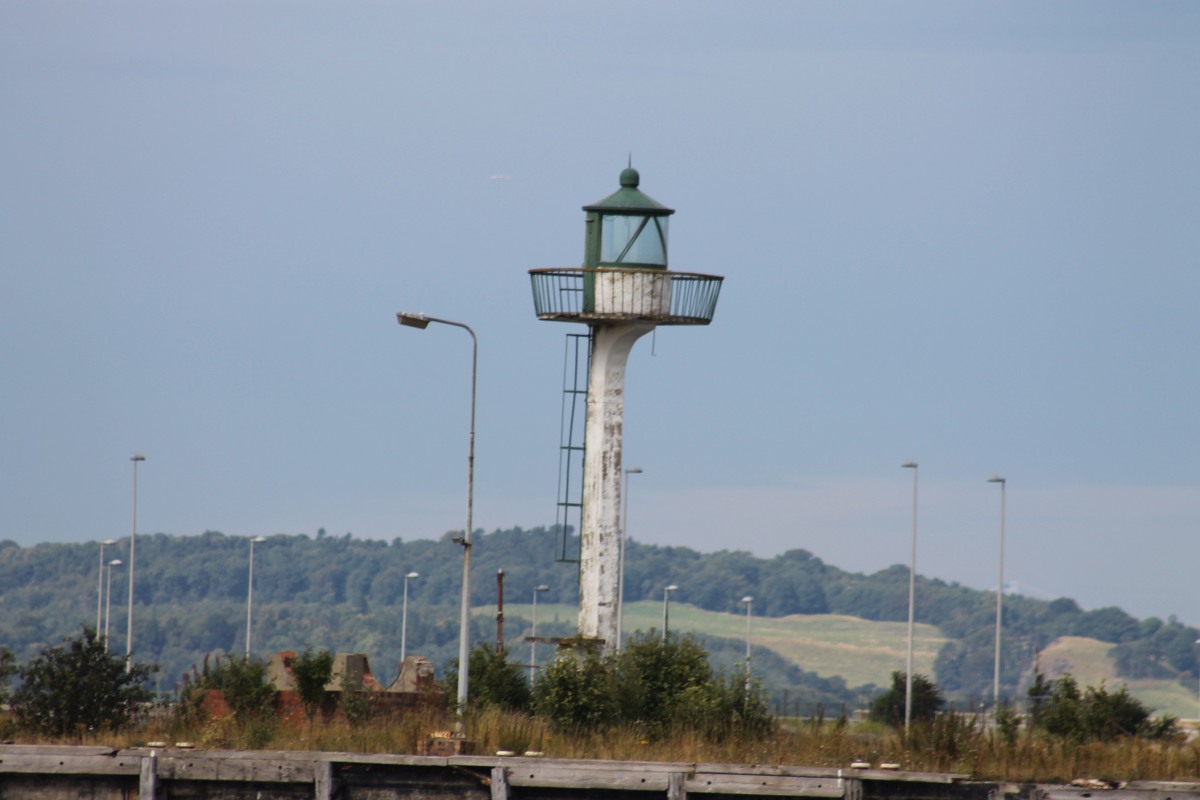 At the weekend, we travelled down from the north coast to the Isle of Wight to see my family for our son’s first birthday. Of course, it wasn’t possible to do the journey without at least one lighthouse stop! In my attempt to finalise a list of lighthouses in the UK, I have discovered more and so we took a detour along the coast north of Edinburgh after our stopover in Perth. I’d been to Granton during my lighthouse tour in 2012 to see, what I have recently discovered, is actually a former Northern Lighthouse Board training facility. There is a Stevenson-style lamp room sitting on top of a building and, rather than being used for navigation, it was only ever used for trainee light keepers. I had found out about the additional two lighthouses here though just last week, one on the end of the east pier and the other on the middle pier. I won’t say a huge amount about either as there’s not a lot to say. We weren’t able to get very close to the middle pier light, which is essentially a small lamp on the top of a pole. The other was a white square structure on the end of the pier. It was a nice wander out to it, but it’s looking a little derelict now with graffiti all over it. We’re not sure if it is still in operation as it doesn’t look like it, but there is a solar panel on top. We didn’t spend long in the area as we had to get down the road.

This didn’t stop us from calling in on St Mary’s island lighthouse nearly Whitley Bay as we passed by though. When I’d originally been in 2012 the tidal island had been cut off and when Bob and I had made a quick stop there more recently we didn’t have time to enjoy a walk across the causeway to the island. This time around we chose to make time for it. It’s a stunning tower and it’s tidal access adds an extra appeal to it. It turns out they have a real good set-up there, although the funding hasn’t come easily to keep it going.

We had a quick walk around the outside of the tower before heading in to the shop and buying tickets to go to the top of the lighthouse. What I often find in many lighthouses that you can reach the top of is that you need to go on a guided tour with someone who works there. St Mary’s is different though and you can wander up at your own leisure. This time we had our son with us and he is very keen to walk up steps at the moment, so he was more than happy to wander on up (holding his daddy’s fingers). He got about two thirds of the way up before Bob decided it was too much for his back, so he was carried the rest of the way up. It was a bit of a challenge to get Bob and our son through the small opening up to the lamp room, but they got to the top and, for our little man, it was the first time he’s been to the top of a lighthouse.

There were some great views from the top and, although the optic in there is not the original (it came from Withernsea), it is still nice to see an optic in there. After having a good look around we started our descent. At the bottom of the tower we noticed live footage of the nearby rocks so people could look out for seals. However, I noticed that the camera could be spun around to see the lamp room. So, I then headed back up to the top, leaving Bob with the instructions to take pictures of me at the top once I got there. I’m not really sure why I decided to go back up – it’s much more exhausting the second time around, but we got the pictures and I then returned to the bottom of the tower. While we were there, we got a certificate for our little man to mark his climbing of the lighthouse.

By the time we left the lighthouse the sun had come out and so we took a slow wander back along the causeway before grabbing an ice cream and hitting the road again.

The following day was particularly exciting as I managed to bag another lighthouse on my third attempt at it. That’s all I’ll leave you with! More to follow soon 🙂