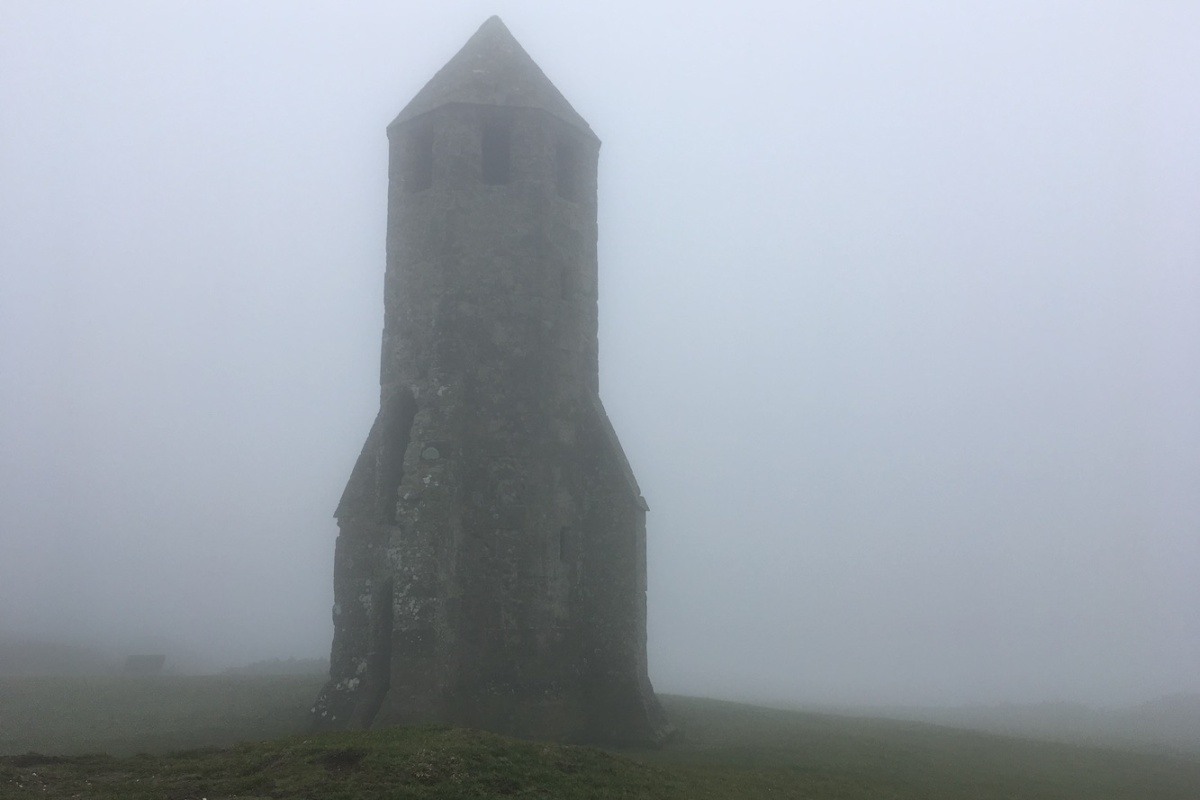 Being from the Isle of Wight, I spent many years paying very little attention to the fantastic lighthouses it has to offer. That was, of course, before my bagging days and I try to make up for it now when I do spend time on the island.

On Thursday morning in Newport it looked like the sun was trying to break through the clouds and there might be a blue sky opportunity at St Catherine’s Oratory, which I had not been to for a while. As we approached the car park in Blackgang it became clear that not only were blue skies unlikely, but we may struggle to find the Oratory in the heavy fog that had nestled happily over the highest points of the island. At the gate we met a lady and her son who were just returning to the car park after an unsuccessful attempt at reaching the Oratory. We told them that’s where we were heading and they could follow us, which they did. Unfortunately I’d left Bob’s GPS device at the hotel so we couldn’t use that method, but on the plus side we had my dad who is an Oratory regular and knew that we needed to find the hedgerow and then the gate. From there we had no trouble and arrived at the Pepperpot, as it is known locally, shortly after.

Seeing the Oratory in the mist perfectly illustrates why it just wasn’t a particularly good location for an aid to navigation. As soon as that mist comes down there’s no chance of seeing a light. Standing inside the Oratory and looking up you could see the moisture moving about in the air. It’s a great place to stand, even though there is very little to see. The Oratory is incredibly old, dating back to 1328 when Walter de Godeton was ordered by the church to build a beacon after he’d been caught stealing wine from a ship wrecked in the area. There is, of course, doubt over the use of the tower all those centuries ago and in the centuries that followed and whether or not they recognised the problems caused by the fog at times. If they had then the message clearly was not passed on as work on a new lighthouse, the Salt Pot, a short distance away began in 1785. Realising that it was perhaps not the best location, the tower was never finished. Leaving the others at the Oratory for a bit, I took a stroll with my dad to see the unfinished lighthouse.

We made it back down to the car park with no trouble, which is not to say that the mist had cleared as it certainly hadn’t. While down that way we decided to pay a brief visit to St Catherine’s lighthouse. We’d not been there since our wedding in 2013 so it was nice to take the kids down and let them see it. In complete contrast to the fog we’d encountered up on the hill, it was beautiful and clear there. Obviously the perfect location for a lighthouse! Well, maybe not quite as even this tower was shortened in 1875, less than 40 years after it was built, due to problems with fog.

St Catherine’s lighthouse is stunning and a wonderfully unique shape. There’s a lot of detail to it. Sadly, I have heard that they will be removing the lens from the tower next year, which will be such a great loss. Seeing it slowly revolving all day every day as it does is so special. Hopefully the visitor centre will be able to keep hold of at least some of it so it is still around to be gazed at for years to come.

So, that was our St Catherine’s experience. Very varied, but definitely an enjoyable morning returning to a couple of old haunts 🙂