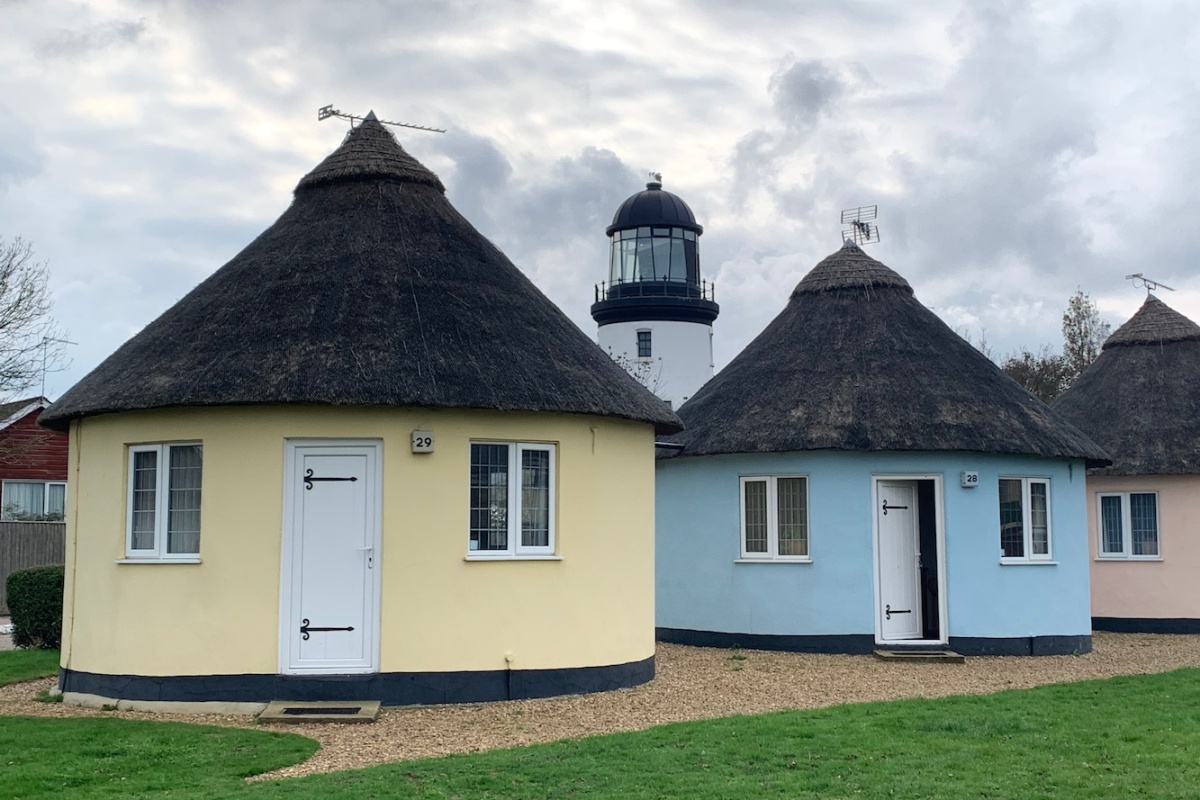 Following a day visiting the lights of Suffolk on Sunday, it’s was Norfolk’s turn yesterday. It’s another area I’ve been to a few times but covered very few of them in detail on here.

Gorleston-on-Sea was first up and I was happy to return to this one. On my 2012 tour I was in the habit of parking in any old car park and then walking to the lighthouse rather than parking as close as I could to it. That meant I spent a little longer wandering the streets of Gorleston that time.

This time I spent a little more time seeking different angles and approaches rather than just close-ups of the tower. This theme continued for much of the day, but more on that later. I made a point of walking around the back of the tower this time and then strolling out along the pier, noticing the beach on the other side, which I’d not realised was there before.

Joe the Drone had a bit of a fly around and captured some excellent pictures as usual.

Northwards we went to Winterton-on-Sea. Last time I was there I got the feeling that visitors weren’t massively welcome with lots of private road signs in the area. So I then settled for a view above the houses in nearby roads. This time though we went for a different approach, this time from the beach and sand dunes.

I’m glad we did as it’s a much more enjoyable approach. While Bob flew Joe about over me like I was in some sort of action film, I wandered as close as I could get to the lighthouse, which wasn’t that close, but I found some higher ground and got some nice views from there.

Joe had got some great views too.

Bob then suggested we try approaching from the nearby holiday camp area so we set off back over the dunes. This turned out to be a good idea as, although we still couldn’t get close enough to touch the lighthouse we got much closer than I’d been before. So I was happy with that – and it was nice to see the tower behind the coloured little houses too! Winterton lighthouse is actually available as a holiday let and Lighthouse Accommodation can provide more details about this.

On the subject of Lighthouse Accommodation, which is written and compiled by my lovely friend Joy, our next stop was Happisburgh lighthouse where Joy is a very active volunteer. As we arrived at the lighthouse the clouds cleared and blue sky and sunshine came out. It’s always been nice weather when I’ve visited Happisburgh.

It was also nice and calm there today so the walk along the track to the lighthouse was very enjoyable as was the stroll around the wall. The lighthouse is currently closed because of the pandemic, but I would highly recommend going there once it opens again. It’s such a special place and you can see why the community work so hard to keep it running.

One more stop of the day and that was Cromer. The lighthouse here is at the end of a private road and the cottages here are let out by Rural Retreats. On other occasions we may have been tempted to drive up the road, but with Bob wanting to be there long enough to fly the drone I suggested we take the coastal route by walking from the town centre. It’s a great walk, although initially we weaved our way through the people in the town to ensure we kept our distance. Once we started walking along the promenade it was a bit easier and the views opened up. We reached the row of beach huts and Bob, who was in his usual position in front of me, spotted the steps leading up the cliff.

I knew there would be quite a few steps and they were pretty tiring, but thankfully they changed direction enough to keep them a bit more interesting. Once at the top we took a left turn and followed the various paths along the coast. It wasn’t long before the lighthouse came into view, which is always encouraging! Bob, off in front again, found a narrow track leading from the path up to the lighthouse which went from a fair little path to quite a steep final section, but once at the top I was there and could enjoy views all around.

There was a perfectly positioned helipad for Joe the Drone to borrow for take off.

I imagine Cromer lighthouse would probably have been quite a popular station to serve at as it looks fairly spacious judging by the size of the associated buildings and the width of the lighthouse. It was great to see the light on too. That’s always an added bonus.

On the walk back I enjoyed the occasional look back to the lighthouse as I took a slightly different route along the paths. The views down to the beach and pier were wonderful too with people’s reflections in the water.

Rather than taking the steps back down to the beach huts we followed the path down and came out in the town. More weaving between people ensued and we were soon back at the car.

A great day and I’m so glad I took the opportunity of suggesting the alternative routes at both Winterton and Cromer. The coastal route is near enough always more enjoyable. 🙂