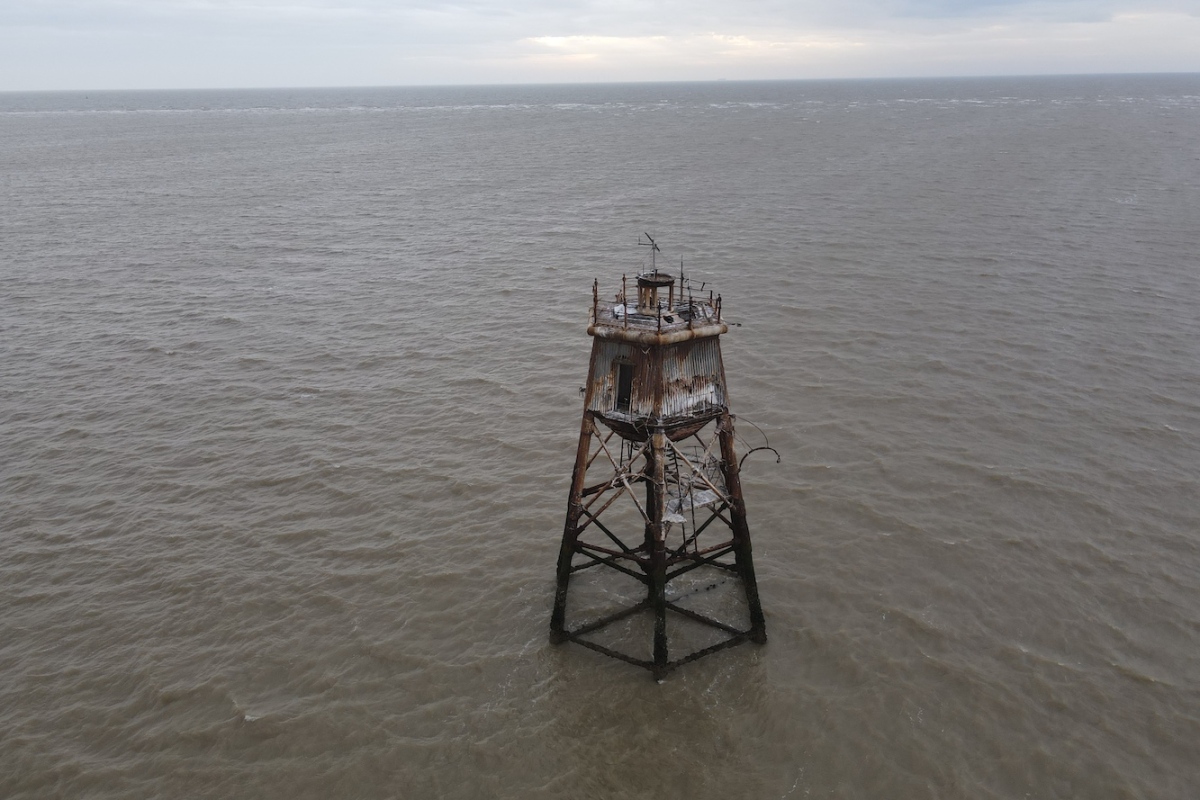 A key target for this trip was to attempt to get out on a boat for a closer look at Gunfleet lighthouse. After spotting it in the distance during my first visit to the Naze Tower, it had always felt so out of reach, but I like to think that these things are never really out of reach. You just need to find a way of getting there so I did some research and found a boat company, Sophie Lea Charters based in Brightlingsea, who were willing to take us out.

I’d originally selected Wednesday as the day of the trip but having spoken to the boatman on Monday evening it was looking like Wednesday wouldn’t be possible. However, he did say an early trip on Tuesday would be an option. You have to jump at these chances when they come, don’t you? I’d also invited my lighthouse partner in crime John to join us, but the early start meant he deprived himself of a few hours’ sleep in order to arrive on time for the trip.

We found Sleeping Beauty in his van when we arrived at the car park and once we were all ready, we had a nice stroll around the harbour area, which seemed picturesque. Thankfully the rain had stopped and we could enjoy the views while we waited for the boat to arrive.

Once Lee arrived with the boat and we’d hopped on board we were warned that we wouldn’t be able to get very close to the lighthouse as it sits on Gunfleet Sands, the very sandbank it was designed to make mariners aware of. This reminded me of something an island/hill-bagging friend said to me last year, that lighthouses were built to warn boats to stay away from them so by trying to get as close as we can to them goes against their intended purpose. Gunfleet was a perfect reminder of this, and in this case Gunfleet wins as the tide was low. Waiting for high tide that day wasn’t an option due to worsening conditions as the day went on and attempting to get around the east side of the sandbank would also not have been wise given the increasing wind and swell.

John pointed out a nearby faux lighthouse, Batemans Tower, which is actually a memorial. Historic England’s website suggests that the tower, when built, was actually intended to be used as a lighthouse, but the port plans in the area never materialised.

The trip out was good and we passed the Gunfleet Sands wind farm. It was the first time I’d sailed close to an offshore wind farm and I think we were all impressed, even those who aren’t normally so keen on wind turbines!

It seemed to be a while before the lighthouse came into view, but eventually we spotted it. It has a fairly distinctive shape now without the lantern on top. There’s a lovely postcard online (towards the bottom of the page) showing how it looked when it was an active lighthouse marking the sandbank. It’s actually a really interesting tower – and the sole surviving screw pile lighthouse in the area with the other few lost over the years. The whole idea of building a lighthouse on a sandbank sounds a little bit mad, but it clearly worked for a long time, although gradually these structures are being lost to the sea as time passes and they are no longer maintained. The latest casualty is the Wyre light that guided ships safely into Fleetwood on the Lancashire coast which has now almost completely collapsed.

Gunfleet was an active lighthouse, operated by Trinity House, from 1850 until 1921 as a manned station. It lies six miles off the coast of Frinton-on-Sea. It must have been a rather interesting place of work, almost like a rock station but with less space. There’s a great page online showing a few pictures from inside the tower in 2005 when a couple of chaps visited, which can be seen here.

There’s another interesting tale from Gunfleet’s history, which perhaps explains a little why it wasn’t in such a bad state internally in 2005. In 1974, it was partially renovated by the team behind the Dutch Radio Atlantis (to be broadcast as Radio Dolphin from Gunfleet lighthouse). After much of the equipment was installed representatives from the police, Home Office and Trinity House visited and demanded to be allowed into the tower. Eventually the broadcasters relented and were arrested with all of their equipment being removed from the tower before they had managed to get it up and running. A full account of this story can be found here.

With the lighthouse now looking clearer Lee stopped the boat and informed us that it was as close as he could go as we didn’t have much water depth to play with. Although we weren’t as close as we would have liked to have been, we were able to enjoy a bit more of a broader view. As we began to take our pictures a wonderful ray of sunlight shone through the clouds to the left of the lighthouse which was great to see.

In the meantime Bob launched Joe the Drone with my assistance (I’ve got rather good at helping with take offs and landings on boats, I must admit) and flew him towards the lighthouse. The wind had picked up by this point and Bob kept a close eye on how Joe was managing with the conditions. Always a bit worrying when the drone is flying over a massive expanse of water. Thankfully Joe made it out towards the lighthouse and got some excellent pictures, showing us more of the detail we couldn’t see from the distance we were at.

John took these great pictures of the lighthouse with the wind turbines in the background haze, which I thought made for really interesting images.

We admired the lighthouse for a while and enjoyed the view as it changed again with the lovely orange sky as the sun began to break through even more of the cloud. Joe arrived safely back on the boat and we began our return journey, watching the lighthouse getting smaller and smaller.

We passed even closer to the wind turbines on the way back and John also pointed out the buoy that has now replaced Gunfleet lighthouse and marks one end of the sands.

It had been a really good little boat ride and to get out and see something that most people take little or no interest in was pretty special. Gunfleet lighthouse had always felt like a tricky one and in a way it still is as it has that element of not being able to get close to it. At least with rock lighthouses they are on a rock that you can either sail close to or, if you’re lucky, even land on, but this is something else. But the trip was worth it, that’s for sure.

There was more lighthouse visiting later that day, but I shall save that for another post. 🙂