It is unusual for me to not be posting here at this time of year as we enter prime lighthouse bagging season. Of course the coronavirus situation has put paid to any hope of trips and I certainly had an exciting April lined up. However, better not to dwell on these things.

I recently discovered a couple of lighthouse pictures I thought I had lost from a pre-lighthouse tour trip. I shared these with a friend who suggested writing some blog posts on the lighthouses I saw before I started this site in 2012. It seemed like a sensible suggestions, so here is the first of, what I suspect will be, three posts.

Back in 2009, a year before I started travelling around specifically to see lighthouses, I went to New York for a work event and I also spent a few days exploring the city. I was looking through my pictures recently and noticed a picture I had taken on that trip of a single lighthouse. I had absolutely no idea which lighthouse is was, all I knew was that I had taken it from the ferry to Staten Island. I’d gone over to the island with a couple of colleagues (who are also good friends) and had considered trying to find the Staten Island Range Lighthouse while there. Unfortunately the return ferry times didn’t allow enough time to reach it.

I’ve now had a chance to find out more about the lighthouse I passed on the way there. It is called Robbins Reef lighthouse. I like to call it New York’s answer to Oxcars as it sits in the middle of a river on a stone platform and has a band. The current tower pre-dates Oxcars by 3 years, dating from 1883, although another tower marked the reef from 1839. It marks a sand reef at the eastern end of the Kill Van Kull strait. The increasing use of New York Harbor was the reason for its introduction.

The current tower is known as a Caisson or “spark plug” lighthouse, which is a cast iron offshore light on a concrete platform. This type was introduced as a cheaper alternative to screwpile towers. 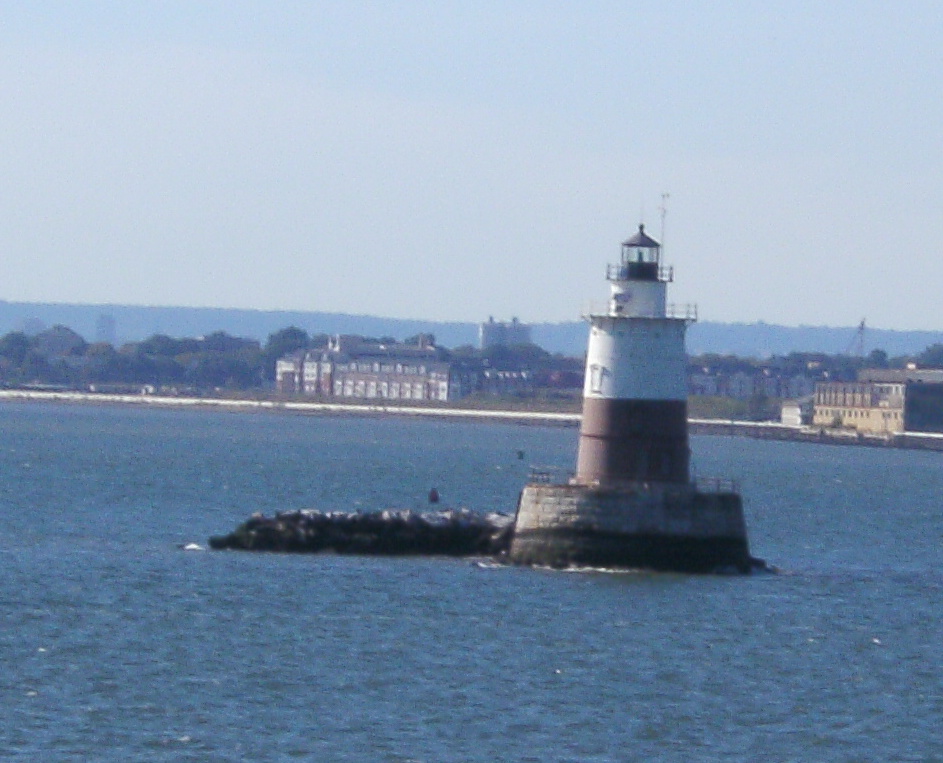 Possibly the most famous story associated with this particular lighthouse – and where it gets its nickname “Kate’s Light” – is that of Kate Walker who was married to the keeper at Robbins Reef. It is reported that Kate initially disliked living at the lighthouse and wouldn’t unpack her suitcases, but gradually she settled in and became a very good assistant to her husband. When her husband passed away Kate applied to be the keeper of the light, but there was hesitance in assigning her the role. It was a few years later that she was officially given the job and she then single-handedly managed the lighthouse, fog bell and taking care of her children too – including rowing them to school and back each day! In addition she carried out a great number of rescues. A real inspiration, that’s for sure. There is a very detailed history of the lighthouse here, including some stories of Kate’s time there, here.

It’s a really interesting light and I’m glad I came across the picture and looked into it a bit more. My first – and hopefully not last – American lighthouse! 🙂