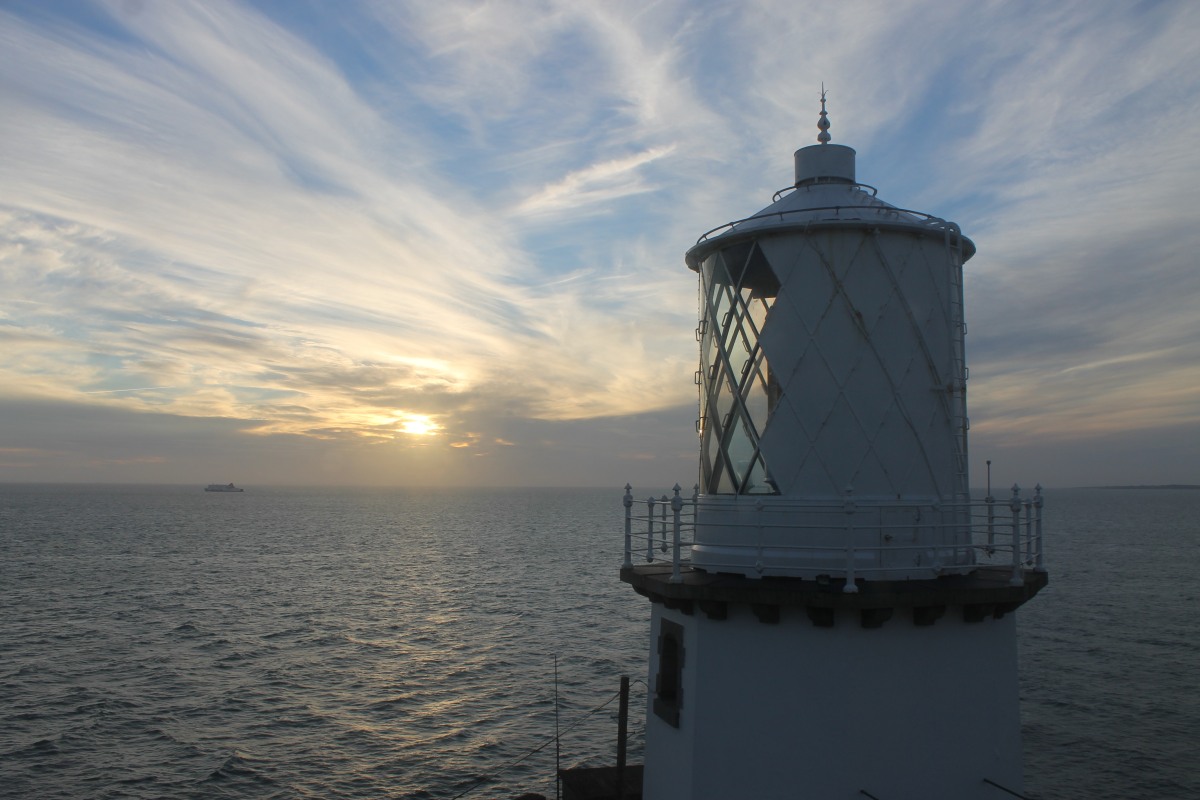 The first Sunday of our honeymoon we set off from Black Head lighthouse (where we’d seen a wonderful sunrise) heading north along the coast. We joined the main coastal road and were stuck behind a group of about 20 cyclists. It’s understandable why the road is so popular with cyclists and motorists, there are beautiful views all the way along. We continued up along the coast, leaving the main road at Cushendun to take in Torr Head. From the Head we could see across to the Mull of Kintyre in Scotland and we explored the ruins of an old building. As we turned the corner at the most north eastern point of mainland Northern Ireland there were even more wonderful views, including a look across to Rathlin island where we planned to go later in the week.

We arrived at the Carrick-a-Rede rope bridge that afternoon. I must admit to being very excited about going across the bridge. It was a beautiful day and we enjoyed the walk along to the bridge, stopping regularly to grab pictures of the fantastic coastline. Bob decided it would be a good idea to bounce around on the bridge to stop others getting on and “ruining the pictures”. Crossing the bridge gave some amazing views of the rocks below and then more of the coastline from the island on the other side. It was a great place and even busy (sort of) in October, so I can imagine it might be a little frustrating at the height of summer. Glad we went at this time of year!

Our next stop was the Giant’s Causeway. They have obviously got a lot of money coming in based on the size of the visitor’s centre they’ve got there. We watched a short film showing the actual and mythical cause of the fascinating geology there. I must admit to being quite taken by the mythical version of events! Again it was quite busy there, but we managed to mostly avoid the crowds and get some good pictures. Bob was intent on finding a perfectly hexagonal rock as shown in a lot of the promotional material, which was not as easy as you might think! We also randomly met a guy who Bob had climbed Mount Vinson with in late 2011!

Finishing up there we decided to follow the coast around, ending our journey in Derry/Londonderry. We passed Dunluce Castle on the way and it was dark by the time we reached the city. Being a Sunday evening everything was closed, but the Guildhall was looking stunning with the colour-changing lights. We also enjoyed seeing the Peace Bridge, which opened in 2011.

The following day we set off early as we had a very exciting trip out to Mew Island arranged!  We took a quick drive north, stopping briefly to see Ferris Point lighthouse, a modern-looking structure that is actually older than you’d think, but no longer in operation. From here we could look across Larne Lough to the old Chaine Memorial Tower lighthouse in Larne. We then popped over to Larne to see the Memorial Tower close up. Approval of a light being added to the tower, which was a memorial to James Chaine (a former Member of Parliament for Antrim), was given in 1896. The light, which is 22 metres up the 28 metre tower, is still in operation today. We followed this visit up with a quick trip to Titanic Belfast, which we hurried around trying to avoid the numerous children about. We hoped to go back at some point to get a look at the dry dock Titanic was built in, but there wasn’t time in the end (we’ll just have to go back).

Newtownards airport was our next stop! Bob had arranged for us to go up in a small helicopter to see Mew Island lighthouse from above with Aeroheli. After I’d climbed into the front and Bob had slid into the back, Johnny started up the engine and a short while later we were off! Fortunately the helicopter didn’t seem so small once we were inside. We flew out over Donaghadee harbour and the lighthouse there and had fantastic views as we approached Mew Island. The islands were stunning and we were able to fly around them a few times. It’s now my new favourite way of seeing lighthouses! On the way back I was asked if I wanted to have a go at flying the helicopter. I was a little scared, but gave it a try with a rather worried Bob in the back. It’s only when you’re flying it yourself that you feel again how small it is. We arrived safely back on dry land and I would have been more than happy to have gone out all over again!

It had been a wonderful day with plenty of sunshine and we stopped off at Carrickfergus Castle on the way back to the lighthouse cottage. Then there was another evening of watching the daylight fade into darkness from the cottage window.

One thought on “Our lighthouse honeymoon – part 2”