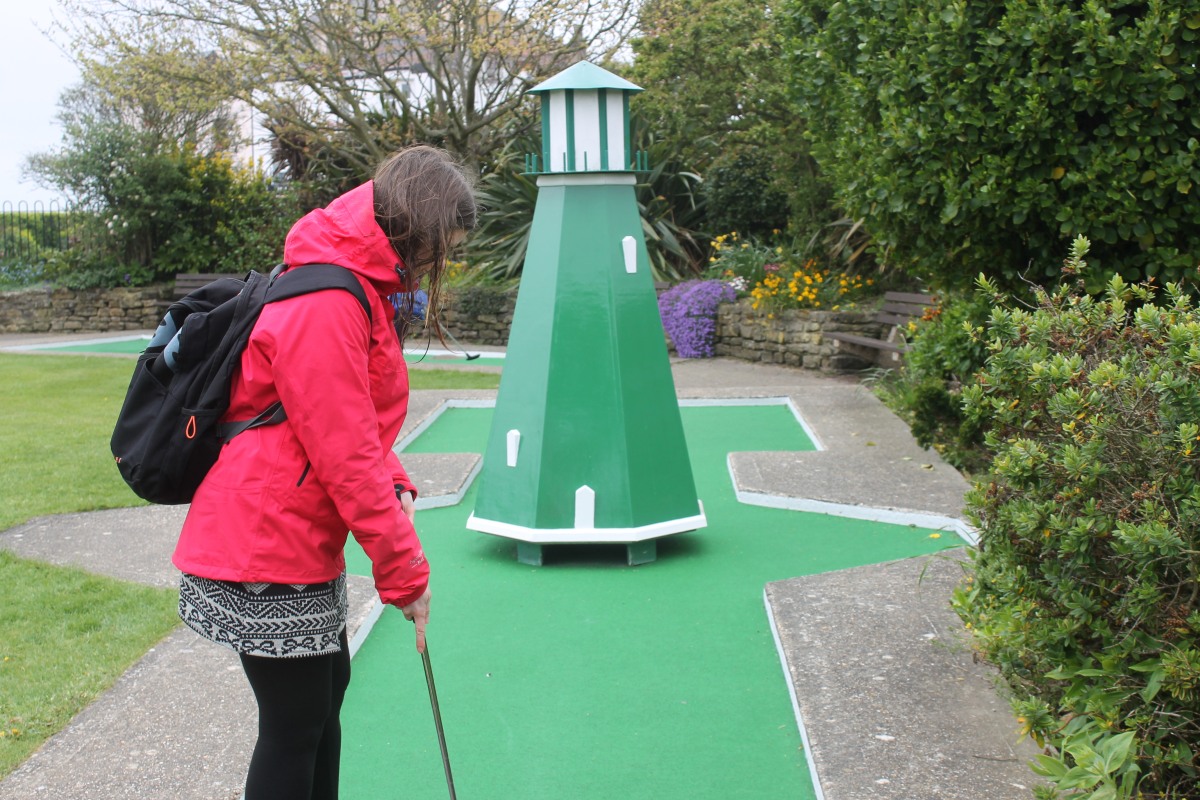 To make the most of the long weekend, my flatmate Liz treated me to an early birthday surprise weekend. The only thing I knew about the weekend was that we were going to Guernsey (and I was supposed to have forgotten that I’d been asked about this). However, I was completely unaware that this destination was only a part of the weekend and that our first stop was actually Bognor Regis. We had mentioned visiting this seaside town in the past, but it had never happened. This first stop was revealed to me though on Friday evening when I was presented with my early birthday cake, birthday card and itinerary for the weekend.

So, on Saturday morning we headed south and, as instructed, I directed us towards the seafront to eat lunch. However, I was informed that we were actually stopping off in the town centre first. We passed the train station and, to my surprise, my sister Katy was there waiting to join our day of fun in Bognor. We then spent some time on the seafront, after we’d established that there was no lighthouse in Bognor. However, we did see some replicas (or fakes), one of which was part of a mini golf course and a couple more within the grounds of Butlins. Visiting Butlins wasn’t quite the reminicence experience I thought it would be, but there was a few small details I remembered. We also visit Hotham Park and took a miniture railway journey. All in all, a great day with various weather conditions setting in.

On Sunday morning we headed off early for Poole to catch the Condor ferry over to Guernsey. It was a three-hour boat ride, during which we were able to see (from a distance) Casquets lighthouse to the west and then Alderney lighthouse to the east. As we approached St Peter Port we were pleased to spot another lighthouse on the south pier followed by yet another on the north pier. Four lighthouse before we’d even berthed wasn’t bad at all! As soon as we reached the island we headed straight for the bus that travelled around the coast for the bargain price of £1 per journey.

We hopped off at the south west of the island and headed to Plienmont Headland for a view of Les Hanois lighthouse, which marks the most westerly point of the Channel Islands. I was fortunate enough to be on the phone to Bob (who is currently climbing Everest and doing very well) when I spotted the lighthouse. It’s a stunning view with the rocky coastal surroundings of the headland. After we’d spend a while gazing at the lighthouse (well, that’s what I was doing anyway), we headed along Rocquaine Bay to Fort Grey to visit the Shipwreck Museum. There was a replica of Les Hanois lighthouse before it had the helipad fitted – with flashing light! A very nice little museum and some beautiful views from the tower as well.

After a quick drink and ice cream we caught the bus again and headed for Cobo Bay. We sat and enjoyed this beautiful beach for a while before wandering along to the north east end and onto Saline Bay. At the end of this beach we arrive at Port Soif. To the south of Port Soif there are some observation towers hidden amongst the rocky coastline which we enjoyed exploring. We then strolled along to catch the bus back to St Peter Port where we paid a quick stop at Candie Gardens and had dinner on the seafront before catching the ferry back at around 10pm.

Despite the sunburn that resulted from Sunday’s trip to Guernsey (particularly for poor Liz who is still suffering), it was a great weekend and helped to tick a few more off of my list. There is still plenty more to do in the Channel Islands though and this taster has made me very excited about heading off to Jersey, Sark and as many of the other islands as I can possibly reach! 🙂