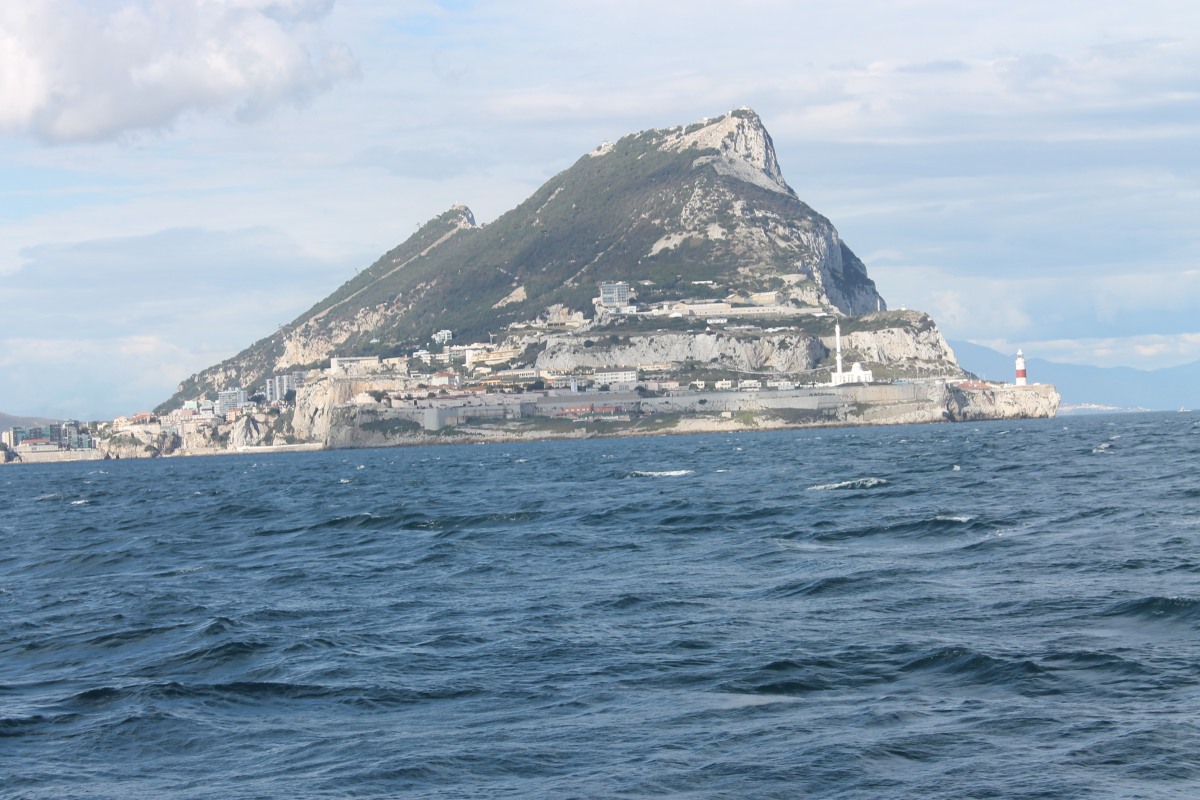 At the weekend Bob and I travelled to Gibraltar for a long weekend of visiting the Barbary macaques on the Rock, dolphin hunting and bagging the lighthouse at Europa Point. The lighthouse is the only one owned by Trinity House to be located on a British Overseas Territory.

The flight to Gibraltar was a little traumatic (and not because it’s one of the 10 most dangerous airports in the world). I had developed a cold shortly before we left and, as a result, experienced very painful ears on our descent into Gibraltar. We landed safely after getting a glimpse of the Europa Point lighthouse at night. A short time later we were walking across the runway towards the centre of Gibraltar. The runway crosses the main road leading from the town towards the east side of Gibraltar and the Spanish border, and this means the road has to be closed before a plane can land or take off. It makes it a very interesting road to cross (I believe a photo of me doing an impersonation of a plane on the runway is hanging around somewhere)!

On Saturday we took the cable car to the top of the Rock where we met the Barbary macaques for the first time. I think we both found them a little unnerving and so kept our distance. It didn’t help that we saw a woman with one sitting on her head, picking about in her hair! Our walk back down the Rock through the nature reserve allowed Bob some opportunities to search for the highest point (as he does) and gave us a chance to visit St Michael’s Cave, which is absolutely amazing. Through a donation they have been able to set up some great lighting in the cave, which really shows off the stunning stalactites and stalagmites. Definitely worth a visit.

After reaching the bottom of the Rock we headed to Dolphin Adventure. The purpose of the boat trip, as you will probably have guessed, is to see dolphins, but we were a little more interested in seeing the lighthouse emerging as we moved further and further out. Our lack of interest in the dolphins wasn’t helped by the complete absence of the dolphins themselves that afternoon, although we did see a sunfish (a very strange-looking creature). We got some great views of the lighthouse though! As we weren’t successful on the dolphin hunt, the lovely people at Dolphin Adventure offered us free tickets to go out again at another time when we would hopefully get to see them. We did revisit them again on Sunday and had a very successful trip with plenty of dolphins swimming around the boat.

Now to the exciting bit! After having some Moroccan tagine for dinner to celebrate how close we were to Africa, we caught the bus to Europa Point, the southernmost point of Gibraltar, where it’s only land-based lighthouse stands. The timing for our arrival was perfect as the sun was about to set. We walked around for a while, taking pictures of the lighthouse, the views from the point and the sunset. As I was taking a photo of Bob in front of the lighthouse, I caught my first glimpse of the light at work. We were also able to see lights in operation on the coasts of both Morocco and Spain at the same time – fascinating, particularly for someone as partial to a lighthouse as I am! As the sky darkened and the light became more prominent, Bob took the (perfect) opportunity to get down on one knee and ask me to marry him. I’d had very little time to prepare myself for it as I only suspected he was going to ask about a minute or two before he actually did. Having already decided that I wanted to spend the rest of my life with him, answering the question was easy (I said “yes”, by the way). As I am sure you can imagine, the lighthouse at Europa Point is now my absolute favourite of the UK lighthouse tour, aside from the fact that it’s not physically located within the UK. It is a stunning lighthouse, but the proposal just made it so much more memorable. I will certainly be remembering that one for the rest of my life.

So, following the weekend there is now a very exciting wedding to plan and, of course, a big move to Scotland! It continues to amaze me that my decision a couple of years ago to eventually embark on a tour of the UK’s lighthouses has led to some huge changes in my life. It was my love of lighthouses, as well as his sense of adventure and some amazing timing/fate, that brought Bob and I together in the first place and I am so pleased that I have found the perfect man for me who is more than happy to join me in the uklighthousetour2012/lifetime quest. It is, in large part, because of him that the tour has continued as it has throughout the year and I am hugely grateful to him for making this happen. I will also take this opportunity to thank him again for making the weekend the best I have ever had. 🙂

2 thoughts on “uklighthousetour2012 goes overseas for the best weekend ever”