I began the day by having a rather long chat with the owner of the B&B I stayed in (I’ve now left the area that seems to be seriously lacking in campsites) over breakfast. She was telling me about her back, her family history and her husband’s job! The B&B owners I have met so far have all been really friendly and very chatty.

Following a request from my sister, and to avoid the Tyne Tunnel experience again, I drove further inland this morning to pay a visit to the Angel of the North. I know some might say it’s ugly and a bit of an eyesore, but I like it. It is huge, but is a great landmark and a pretty peaceful area, considering it’s next to the A1.

With the advanced warning that the landscape gets a bit more industrial again at Blyth, I was looking forward to getting my first stop out of the way. However, I don’t quite know where that information originated. It may not have been a seaside town or boasted great views, but it was actually a pleasant enough (but very cold) start to the lighthouse-hunting day.

I then called in at Amble, which refers to itself as “the friendliest port” on its welcome sign. I don’t know about that. My first experience was of lots of people walking across roads in front of me, which came across as more annoying than friendly if I’m honest! Perhaps if they had walked out in front of me waving banners saying ‘Welcome to Amble, Sarah’ I might feel differently and may be inclined to agree to their claim.

Just outside of Amble I passed through, what looked like, a beautiful little village, Warkworth. I imagine its main attraction is the castle, which sits on top of a hill as you enter the village from the south. Then you pass along a quaint little road and a really pretty bridge. Simply lovely!

I then stopped at Seahouses and got my first glimpse of the Farne Islands. The sky was clearing by this point and the sun was out over the islands and their own lighthouses. The old lighthouse on the pier seemed to be quite the little gathering place, which I assume is because it provides (very slightly) closer views of the Farne Islands. As I walked back from the lighthouse I overheard someone who had been out on a boat saying that there had been plenty of puffins about today. There are a number of boat trips from Seahouses, most of which provide an opportunity to see puffins and seals, but I don’t think I would have got on one of those boats today if I was paid! Not in these winds!

My final stop of the day was Bamburgh. By this point the sky was turning blue and the sun was shining, which made a welcome change! The lighthouse looks out across the North Sea and there are some fantastic views from the road leading to the lighthouse (pictured, at the left of the picture).

Just two stops left in North East England and then I’m off to Scotland! 🙂 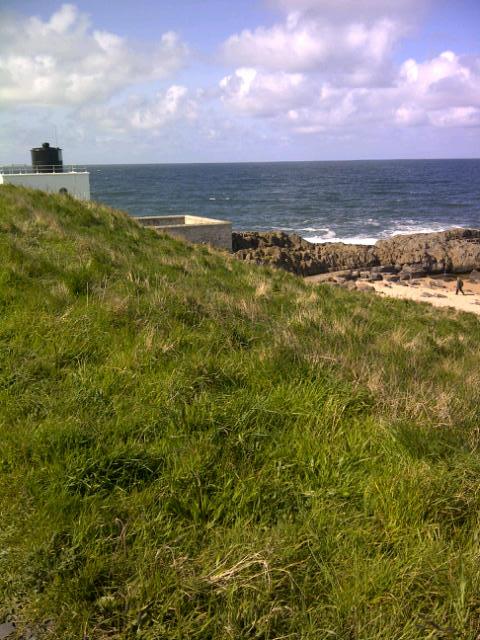